"There are a few guys that might go a little stir-crazy by the end of this."

New Zealand golfer Ryan Fox says there will some players who won't cope with the return to tournament play under the strict Covid-19 safety protocols. 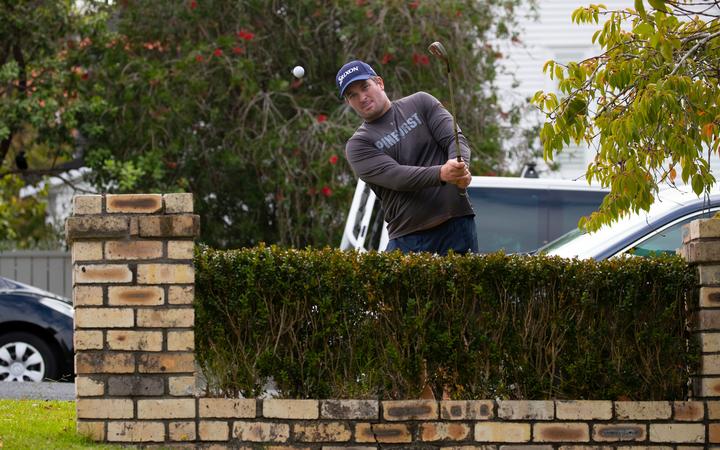 Fox returned to the European Tour last week and just four days after arriving in the UK he managed a top 10 finish in the British Masters near Newcastle.

Not a bad return for the 33-year-old, who in April didn't think he would be playing again this year and spent his lockdown time chipping and putting around his Auckland home.

Earlier this month Englishman Andrew Johnston admitted his mental health struggles during the pandemic and withdrew from the Tour, saying he felt uneasy in the bubble environment.

However, sport returned in Britain on 1 June with behind-closed-doors competition.

The players on the European Tour are following strict health protocols and despite a few concerns about leaving New Zealand, Fox decided to make the trip.

Over the next three months he'll play 12 tournaments with the goal of earning enough world ranking points to book him a spot at the Tokyo Olympics.

Whilst a busy schedule, it is one he believes he can handle, even with the added pressure of Covid-19.

"You get tested when you arrive at the tournament and then you're restricted to your hotel room until the results come back, they check your temperature every day, you've got a symptoms check every day and they're making sure everyone is wearing masks inside, you can only socialise with one other person and that has to be your caddy and there is social distancing for meals."

Fox would normally have his wife Anneke with him based at their London apartment, but for safety reasons they decided it was best that she stayed in Auckland.

"We've basically got to enter a bubble each week (before a tournament) and it's only essential people - players, caddies and tournament staff - so with no spectators there was no point in my wife coming over."

"It's very different, I can drive back to the apartment for a night in-between events to do some washing and repack but certainly not spending the amount of time in the apartment like we would in a normal year."

Fox feels the best place to be is on the course.

"Almost playing a tournament feels better than being in our apartment in London as it still feels a bit dangerous going out in town on public transport, even though everyone is being safe with wearing masks."

A bit of a treat to be allowed in the gym this week. Although a bit strange having to wear a mask #foxtracker #covidgymlife

Fox is very comfortable with the Covid-19 testing system in place for them.

"In the tournament bubble you know everyone has tested negative and you don't have a very high chance of getting the virus so I'm going to play as much golf as possible and hopefully stay away from the virus for the next 12 to 14 weeks."

Being away from the norm will be a mental challenge for many players and just ten days into it Fox concedes it has been a bit of a challenge and that playing Xbox is starting to wear a little thin.

But golf is keeping him busy, a dozen events, including the US Open, will hopefully result in an improvement in his world ranking and will secure him a spot at next year's Olympics.

"I've spent a lot of time in my hotel room doing nothing, so there are a lot of guys spending more time than usual out on the golf course, because that feels more normal."

"Certainly these first six events are very strict so there could be a few guys going a bit stir-crazy by the end of it."

Hopefully Fox won't be one of those and believes he should be able to survive.

"Three months is my limit," he said.

He's pleased to have been granted a spot for the US Open in New York in September and has been told that they won't have to go into quarantine before hand.

However, he's decided not to take part in the European Tour's end of season Race to Dubai as he doesn't want to have to quarantine for a second time when he returns to New Zealand.

His schedule continues this week with the Hero Open in Birmingham.