The Central Pulse have had to dig deep to win a 10th straight game in the ANZ Premiership. 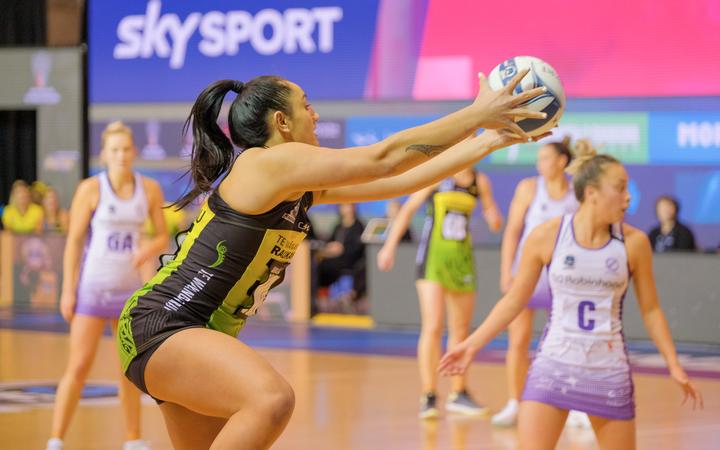 The Pulse have overturned a two goal deficit at three quarter time to run away with a 46-36 win over the Northern Stars in Auckland.

The defending champions are now a commanding 19 points clear of their nearest rivals, the Northern Mystics, with the Stars remaining fourth, a further four points back.

Once again the injection of Tiana Metuarau at wing attack paid off in spades for the Pulse. Trailing by two heading down the home straight, Metuarau helped get the movement back into the Pulse's attacking end.

That resulted in more ball getting into shooter Aliyah Dunn's hands, the sharp shooter producing a player of the match performance with a 28/31 return as the Pulse completely shut the Stars out to the tune of 16-4 in the last quarter.

The Stars added plenty of value to the match but were unable to stay with their opposites for the duration after making an impressive fist of it for three-quarters.

Finding their feet in the opening exchanges, both teams were seamless with their transition through court in a goal-for-goal start. However, opportunities soon opened up for the defenders as Kate Burley and Storm Purvis put the squeeze on the Pulse shooters.

There was a similar pattern at the other end with Katrina Rore and Kelly Jury make life difficult under the Stars hoop. Getting more ball into the hands of prolific shooter Maia Wilson, it was the Stars who won the plaudits in the first stanza when leading 11-8.

The Pulse turned up the defensive intensity on the resumption, resulting in an evening up of the possession stakes. The team defence of the Pulse, with Jury getting a number of deflections, restricted the Stars attacking momentum while creating a flurry of turnover opportunities.

A run of five straight goals helped the Pulse grind their way into the lead in an increasingly rugged match. The pressure exerted from both sides provided mini momentum swings each way with the Stars regaining the lead and then losing it again during 12 riveting minutes of closely-contested netball.

The league's most accurate shooter, Dunn proved her worth under the Pulse's hoop, completing a clean sheet with 11/11 from the first half, providing plenty of movement and picking up a couple of turnovers for good measure.

The Pulse turned the tables to take a narrow 21-19 lead at the main break.

The Stars showed they were far from done, lifting the intensity with a forceful showing during the third stanza. Smothering defensive pressure from the Stars prevented the Pulse from playing their natural free-flowing game and forcing the defending champions into error.

Wilson remained a key figure under the Stars hoop, showing all her class to take every second pass while setting up the circle and sinking most of the opportunities that came her way from close and long range.

Former team-mates and respective centres Claire Kersten (Pulse) and Mila Reuelu-Buchanan had a titanic battle through all areas of the court but it was the Stars who drew level early on before slipping into the lead, keeping their noses in front to take a 32-30 lead at the last turn of a riveting match-up.