The Mainland Tactix were denied an upset win over the Central Pulse in an ANZ Premiership thriller in Sunday's opening game at Auckland Netball Centre. 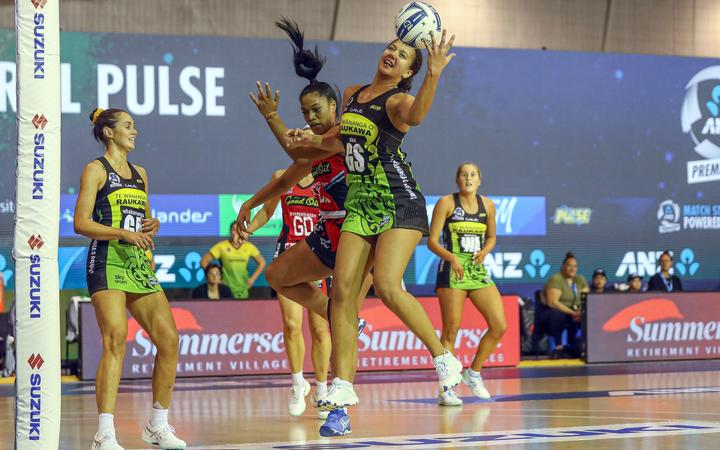 In a titanic arm-wrestle, the table-topping Pulse came from behind to beat the Tactix 33-32.

With one minute left on the clock the scores were tied 32-32 as the Pulse looked to play down the clock, a long shot from Ekenasio giving her side the match-winning edge.

The Tactix led for much of the second half and had a chance to snatch a draw when goal attack Te Paea Selby-Rickit landed a long shot, but it failed to go through the net before the final whistle sounded.

A fired-up Tactix side produced their best performance of the season and came within a few minutes of upsetting the unbeaten Pulse.

The win marked the end of a demanding weekend for the Pulse, pushed hard by both the Tactix and the Northern Mystics, but the Katrina Rore-led side boarded their chartered flight home with maximum points and a healthy buffer on the ANZ Premiership ladder.

In the second game of the day, former Silver Fern Ellen Halpenny has donned the blue strip of the deep south to help the Southern Steel to a morale boosting 41-40 victory over the Waikato-Bay of Plenty Magic.

The new police officer, who stepped away from netball to graduate from police college late last year, was called into the Steel shooting circle as injury cover and made an impact in the southerners win.

Halpenny's experience and composure under pressure was telling in the tight tussle as she netted all of her nine attempts at goal.

The importance of the match was evident in the desire from both teams as they look to haul themselves off the bottom of the ANZ Premiership ladder and remain in contention for a Finals Series spot.

The win was just the second for a Steel side which has been hit hard in the shooting circle with two key injuries.

It was the Magic who was quick out of the blocks to score five straight goals, for a 5-1 lead, as goal attack Abigail Latu-Meafou took the lead in the shooting circle landing all but one of her nine first quarter attempts.

But that was as big as the lead got throughout the first half as the Steel pegged back the difference through the efforts of experienced midcourters Shannon Saunders and Gina Crampton, the southerners trailing 9-10 at the first break.

Nothing separated the two teams at halftime, the scores locked 20-20.

With just under six minutes left in the third quarter, the Steel introduced Halpenny into the 2020 ANZ Premiership.

The Steel opened up its biggest buffer to go into the fourth quarter with a 31-27 advantage.

But it was the Magic which came out with a spring in their step as they closed the gap to just one goal.

The Steel however used all of their experience through the middle, along with the netball nous from Halpenny, to slowly regain their ascendancy for a five-goal buffer.

The Magic again pulled the Steel to within one but were unable to make a vital turnover on the southerners final centre pass, netting the bonus point in the one-goal loss.