Analysis - It took a while, but I managed to find the photo I was after, tucked away in a box stashed in the garage. It is 22 years old now, a snapshot of the rugby team I was in during my last year of college. 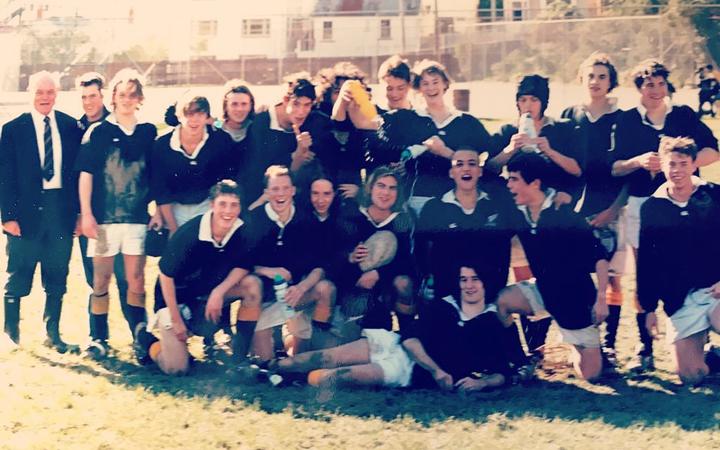 I'd been thinking a lot about my 1998 seventh form social team lately - school rugby has been under the microscope an awful lot due to issues around falling participation among regular kids and an arguably exploitative situation facing elite players.

It's a hot button and exceptionally divisive topic. For all the emotion that's flung around about the game losing its way and imported players, there are a few key narrative details that often get lost.

But, for me personally, it was hard to reconcile some of what I was hearing with my own experience as an admittedly mediocre but committed player all those years ago.

School rugby was awesome. The 20 guys in the photo all smiling with me shared a unique experience that year, somehow being allowed to self-organise a team full of stoners, skaters, nerds and meatheads that went on an unexpected win streak and (illegally) scored ourselves a beer keg at the end of the season. Surely there's still a bit of that sort of experience left?

So I went back to school to find out. Wellington College (WC) has traditionally been the rugby powerhouse in the region over its 128 year history, but it's certainly changed since I left there as an acne-scarred 17-year-old.

For a start, the principal's office is in a new spot, and that's where I sat down with Gregor Fountain, who has been in the top job for three years now.

Fountain, himself an old boy of the school in the late '80s, is blunt about rugby's challenges in 2020.

"We have some serious issues restoring rugby as the game for all New Zealand." he said.

However, all is not lost as WC has bucked the trend and increased the number of teams taking the field from last year, particularly in the under 65kg grade that draws from years 10-12 - a crucial time for when boys decide whether playing is something they want to keep doing.

"School sport is special, because you represent a place that has a sense of family and belonging. It's part of a wider package of youth development, we see it as part of learning. Did this experience grow our young people, help them build skills and enable them to be great men?"

I didn't tell him about the keg party we had back in '98 that enabled us to be great men in our own eyes.

But Fountain said the trick has been to essentially do what that team had done all the way back then, by allowing the students to take control of selection and use the game as an opportunity to hang out with their mates.

"Our approach has been that in weight grade, we now have no A or B teams. There's no kids getting a hiding every week, because they're not being paired off and it's keeping them in the game."

While that was encouraging to hear, Fountain prefaced the next topic with warning that it'd be the 'bad news'.

WC's First XV, the playing group where the next crop of Super Rugby players will hopefully come from, is not the force it used to be. While generally the talk around the problems of elite schoolboy rugby centres around Auckland, it seems that the increasing amount of resources that can be thrown at teams by independent (private) schools can't be matched by state schools.

"The professionalism of First XV and its televised nature means that schools like us are really struggling to be consistent."

Fountain doesn't shy away from pointing the finger at Wellington's independent Scots College, whose prowess at rugby has gone from being a complete joke when I was at school to being joint national champions in 2014.

He levels the same argument at them that often is associated with St Kents in Auckland, who have been accused of soaking up talent from lower socio-economic areas.

While this is something that WC rugby haven't exactly been innocent of over its own history, being a state school with no boarding facilities means they are mainly relying on reputation rather than anything else to entice promising players.

"Last year Scots didn't have an under 15 side, so I'd argue they don't have a rugby programme. They have a team."

'Rugby still has the power to bring the community together'

Later that day I headed across town to NZ Rugby (NZR) headquarters on Molesworth Street, where I caught up with one of the guys standing behind me in the '98 photo.

People nowadays know Chris Lendrum as one of the top administrators at NZR, but back then he was our first five, head boy of the school and handy way to hitch a ride to games and parties because he had his own car.

He's gone on to quite an important position and he's in good company. Among our year group in '98 were future Black Cap James Franklin, All White captain and now shoe magnate multi-millionaire Tim Brown, and cartoonist-turned-sudden-global health advisor Toby Morris.

We shared a laugh about the old days, and how our team was a seriously important part of our connection with a game that we're now both making a living out of.

"From a high performance level, not everything that's happening at school boy level is bad," he said.

"People like to use St Kents as an example, they've spent hundreds of thousands of dollars not just bringing players in, but on coaching and resources. That's not a bad thing, if you take a 13 year old and expose him to all of that he's going to become a much better player. What people struggle with is the macro level, that talent will be concentrated into these top schools otherwise you're not going to be a professional rugby player. That's the perception and there's a real risk around that, but the pathway actually isn't that defined. A quarter of our Super Rugby players haven't gone through a provincial union academy, and that's probably a chunk that will surprise people."

But he admitted that it's far from a perfect system.

"There's lots of parts of it that we're not happy with, that we feel aren't aligned with the direction we want to head in with regards to participation.

"If it's fun and well coached and you're not getting thrashed then you'll have players coming back. [St Kents, Scots], are they pouring this resource and time at the risk of anyone else? People who are never going to be First XV or professionals, who go on to play club or just be lifelong fans."

Fountain had also brought up a pretty interesting personal scenario. He'd formerly been principal of Paraparaumu College, north of Wellington.

It was here that Dane Coles came to prominence as a young player, before being lured away to WC for his final year at school in an effort to bring him to the attention of local selectors back in 2004. It's something that Fountain says 'should never have to happen'.

However, Coles didn't forget his roots and returned to his former school to present them with an All Black test jersey in a gesture that Fountain said proved that rugby still has a powerful way of connecting.

"I think it's a big deal, those things are gold. That mattered to those kids."

That's not lost on Lendrum, either.

"Rugby still has the power to bring the community together in New Zealand like no other sport does, I'm still really confident of that. As guardians of the game here we need to keep people in love with the game.

"Would I like to see more people playing rugby at Wellington College? I want people to be playing a sport they're happy with, and rugby being a really attractive option. It's about rugby coming to those people."

So, all those years after our experience on and off the field in our team of misfits, it seemed like what Lendrum and the rest of us achieved back then may well be the prototype for keeping young players involved.

As I walked down the school drive to leave the grounds for the first time in ages, a bunch of year nines were using their lunch hour to practice a few lineouts on the main field. I presumed the following Saturday they'd be out on a field somewhere in Wellington in their gold and black jerseys, enjoying just being teammates first and foremost.

Maybe one day further in the future they'll still be kicking on as club players, or even higher. Maybe they'll be sitting in the stands as fans. Or maybe sitting down somewhere like Chris Lendrum and I did, talking about an old team photo and the good memories captured in it.