Whetukamokamo Douglas is a Crusader and a Māori All Black, who's taken his famous name from the East Coast to Italy to Christchurch. 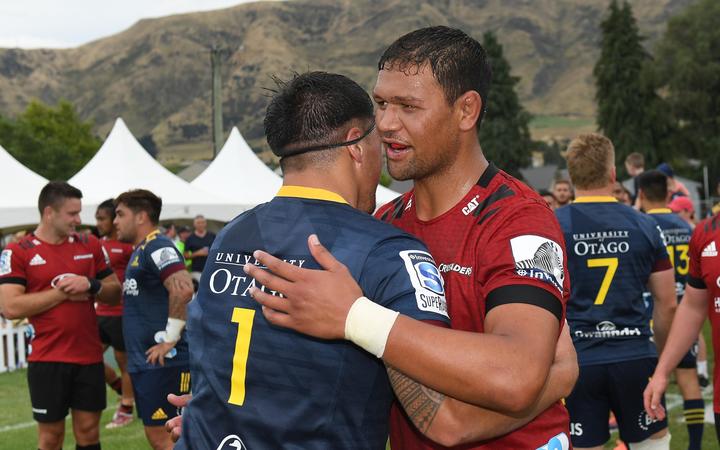 "I'm named after one of my great ancestors from back home (Ngati Porou, East Coast), and I'm very proud to carry the name."

Douglas, of Ngāti Porou and Te Arawa, Ngāti Whakaue, is named after a former Ngāti Porou chief, Whetukamokamo, who was famous for his generosity and warrior wairua.

In Monty Soutar's thesis, "Ngāti Porou Leadership - Rāpata Wahawaha and the Politics of Conflict"*, Bob Maru gives an oral account of the events leading to the death of Whetukamokamo in a fight with a Ngā Puhi force on the East Coast.

Chief Pōmare of Ngāti Manu took his Ngā Puhi party up the Awatere River near Te Araroa sometime around 1823. Te Whetukamokamo and his party of Ngāti Porou launched an attack.

However they were met with musket fire and Pōmare emerged victorious. Te Whetukamokamo was killed in the skirmish.

Whetukamokamo had come with members of his hapu from Tuparoa, near Ruatoria, seeking revenge for earlier defeats to Ngā Puhi.

Whetukamokamo had travelled from Mangahanea with a party of people from Te Whānau-a-Umuariki and Whānau a Hinetapora. They met others returning from fighting at Whetumatarau. Whetukamokamo was warned of the dangers of fighting against Pōmare and his muskets, but he pushed ahead.

It's said he challenged Pōmare to a duel with Maori weapons but was tricked, with Pōmare pretending to scratch his leg before throwing sand in the warrior chiefs eyes. Whetukamokamo was killed in this battle.

The book, "Nga Pepeha a nga Tipuna, The Sayings of the Ancestors"*, quotes lines from a lament for the death of Whetukamokamo. Translated they read, "It was his food so freely tossed out that was my fondness; it was his canoe hauled up with chanting or shouting.

"I think with great regret of his lavish gifts of food, so that unsolicited all came to haul his canoe."

"Being a keen fisherman, he often went out, returning to toss the fish into the eagerly waiting hands of those lining the shore."

When Whetukamokamo was killed, Ngā Puhi left his body in the Awatere River. His family then adopted the name Awatere.

"Arapeta Awatere is my great grandfather and I believe his great great grandfather who was a chief, Whetukamokamo, who sacrificed his life for the safety of his people. It was an uphill battle and one that probably couldn't have been won, but he chose to help in the battle against Ngā Puhi anyway."

Being connected to tikanga maori is incredibly important to Douglas and his own sense of identity.

"That relationship is very strong. Everyday it's what I teach my children and what I reference daily with them. It's been a huge part of my upbringing. Most of my life I've lived in Rotorua or back home on the East Coast. I have strong ties and connections to both my ancestral histories."

And that connection keeps Douglas grounded and self-aware wherever rugby may take him.

"I'm pretty confident in who I am no matter where I go, whether it's Christchurch or Italy. Down here in Canterbury I have more responsibility and more accountability with my children around making sure they are immersed and educated on maori culture. I have to be the teacher and that's what I'm working on at the moment. I believe it starts with te reo, with the language and it's awesome to see the likes of TJ Perenara doing a post match interview in full Te Reo on the weekend doing the same for maori culture.

"Tikanga Māori has been so much of my upbringing that it will always be a part of who I am, whether or not I'm physically connected to the whenua or not. I've lived in Italy and I've spent many years in Hamilton and now I'm in Christchurch. Knowing who I am and knowing my culture has allowed me to be a little more adaptable to different situations and I'm able to look at things differently to other people, those are some of my biggest strengths."

While he doesn't regularly think about his namesake's place in history, he takes mana from the wairua it holds, where it comes from and what it represents.

"Spiritually, every day I know it's there.

"I love going home, up the East Coast or Rotorua, and hearing the language used in the whanau. It always inspires me to keep it up with my tamariki. Going home always rekindles my fire and helps me to reconnect with my ancestors and my culture."

And he says the Crusaders culture is one of the reasons his career has blossomed.

"I love it down here (at the Crusaders), it's a great environment to not only better yourself on the field, but off the field as well."