Basketballer Steven Adams has been preparing for the return of the NBA season on his Rotorua farm and jokingly says he has been "boxing out cows". 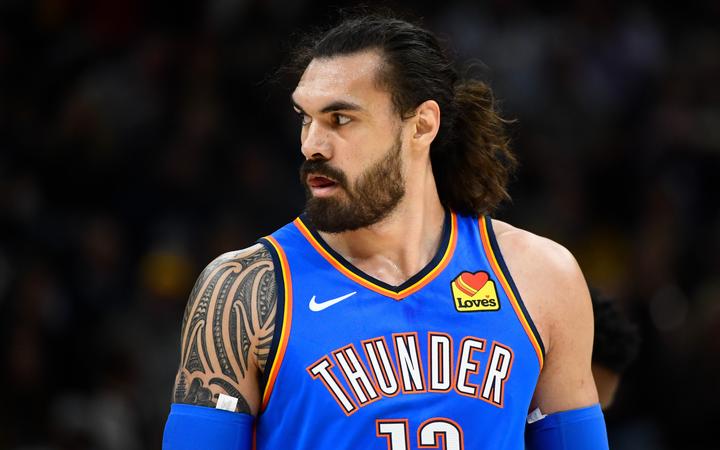 Steven Adams was always going to return to the United States from New Zealand once the NBA season resumed. Photo: AFP

The NBA season went on hiatus in early March, after Utah Jazz centre Rudy Gobert tested positive for Covid-19, and Adams returned to New Zealand to wait out the break in competition.

The Oklahoma City Thunder centre has split his time between his farm in Rotorua and Wellington.

"It was relaxing, mate. I was on the farm doing farm work, got a bit of a farmer's tan going on for a little bit," he told a media Zoom conference.

"The cows are doing good."

Adams has also managed to get in some pickup basketball games to keep sharp for the return of the NBA on 30 July.

Despite an increasing number of NBA players - a total of 25 as of Friday - returning positive Covid-19 test results, Adams had no hesitation in heading back to the US.

"I always imagined I would come back, it would have been kind of empty not finishing the season."

The Thunder and all other NBA teams will stay physically distanced during workouts in their practice facilities until it's time to head to Orlando for the re-start of the competition at Walt Disney World Resort.

The Thunder have a 40-24 regular season record and Adams told the OKC website that it might take time for the team to regain their on-court chemistry after such a long break.

"People can just show up and play, but together as a team and execution of the right timing and plays and coverages and stuff, that's a whole different story," he said.

"It's not really to do with conditioning and stuff like that, it's more to do with, again your team chemistry and how well you flow together as a team.

"The team that gets it on quick are the ones that come out strong. I'm betting on our team.

"Our team's done relatively well with those sort of things, holding together."