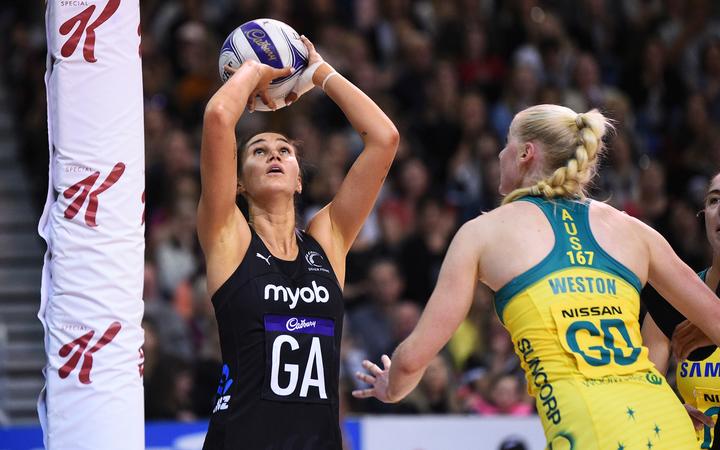 When the Suncorp Super Netball season starts in August, a two-goal shot will be introduced for the last five minutes of each quarter.

The change, announced yesterday by the boss of the Australian competition, gives shooters the chance to score two goals with one shot from a 1.9 metre designated zone in the goal circle.

It's drawn a lot of criticism from the netball fraternity across the Tasman, with players saying they weren't consulted.

Fans have expressed their shock that the league would impose the change despite the overwhelming opposition to the move.

"Players not being consulted over the biggest rule change netball has seen is terrible," former Australian and Melbourne Vixens shooter Caitlin Thwaites posted on Twitter.

Ekenasio, who's arguably the best goal attack in the world right now, said she understood why it was so controversial.

"I heard that the players and the clubs were not consulted in the decision in the end so that throws enough as it is but ultimately I actually find it quite exciting," Ekenasio said.

"I think it takes away from the fact that they've [the Australian league] just got a lot of really really tall shooters, which is hard to combat sometimes.

"I know a lot of people aren't very happy about it but for me I think that if we continue to keep evolving our game then that's a good place to be. I think it's a step in the right direction. Who knows how it will actually turn out in the end. I guess everyone will just have to get to the post and start practising some some long shots."

Ekenasio, who was born in and grew up playing netball in Australia, said only being told five weeks out from the start of their competition was surprising.

"It's actually quite a short time... it's definitely going to change the last five minutes of every single quarter.

"I'd probably be a bit nervous, I know the defenders are definitely more anxious about it I guess because it completely changes what they've got to do within a quarter. But ultimately I'd be quite excited I think as a shooter, so it just opens up a huge amount of possibility."

She said given how much had gone on this year with Covid-19 disrupting the competition, it was a lot to take in for the Australian players.

"It's potentially just another blow for some people but if everything hadn't have happened the way it did this year it could have been a really cool aspect to look to, we'll just see how it plays out." 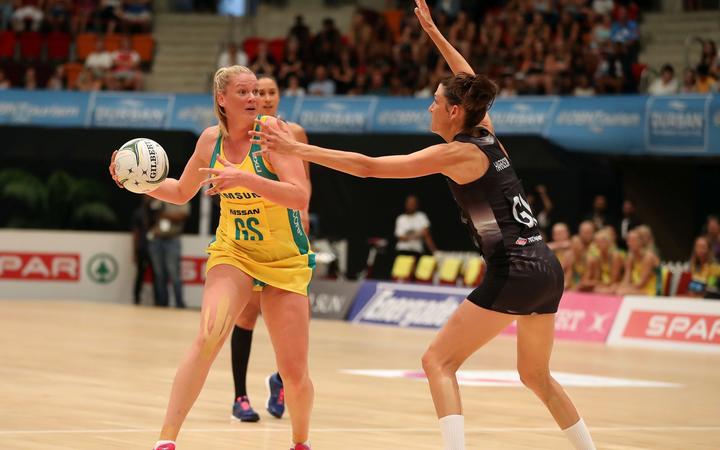 Caitlin Thwaites playing for Australia against the Silver Ferns in 2017. Thwaites is angry players were not consulted. Photo: Photosport

Ekenasio, who is one of the best long distance shooters on the international scene right now, has excelled at Fast Five in the past.

She said she loved playing the official modified version of netball, which is played sporadically at tournaments.

She said it was clear Super Netball organisers in Australia wanted to push on with change.

"They've got their rolling subs already, and they've got tactical time outs I think that they're advancing, they are definitely advancing regardless or not of how the public see it, whether they enjoy it or not.

"I think they're very commercially driven... the fact that players and clubs were not consulted just begs the question, they're changing regardless.

"It's definitely making changes, and kind of making waves in the netball scene, which potentially we haven't seen netball change for a long long long time so I think it's cool."

If the Silver Ferns and Australian Diamonds did meet later this year in the Constellation Cup, could it work in New Zealand's favour?

"I see it as being really interesting... but we're three minutes short every single quarter as well [during the ANZ Premiership] so we've got to find how we pick that up so it's not a bit of a shock going back to playing full 60 minute games."

Ekenasio didn't think the two-point shot would flow into the international game any time soon.

"I guess the whole world will be watching and waiting to see how the two point rule kind of plays out in the season ...but I don't see the international game changing just yet. I think there's just a lot of room for us to continually grow, so we'll see."

Earlier this year, Silver Ferns' coach Dame Noeline Taurua told RNZ that when individual competitions made rule changes, she wouldn't want it to be detrimental to the international game.

She said any rule changes needed to go through the international council to suit all countries.

"I'm definitely a traditionalist, I'm an old dear and even probably watching Fast Five sometimes does my head in. I'm happy with the current rules," Dame Noeline said.

Mainland Tactix coach Marianne Delaney-Hoshek told RNZ today that she wasn't a huge fan of it.

"If I was the Aussie coach I wouldn't like it, I'd be wanting them to play the normal international rules so that they are preparing like that," Delaney-Hoshek said.

"It's not enough notice, you'd want it a bit sooner than that I would say, so I can understand why they are a little bit annoyed over there."

The Australian season begins on 1 August.