The Northern Mystics celebrated the return of the ANZ Premiership with a 47-40 win over Magic, in the process clinching their second win of the league 96 days after their first. 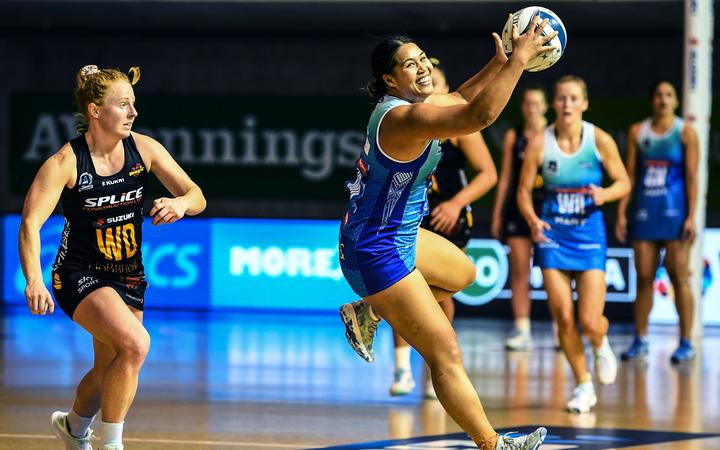 Mystics midcourter Peta Toeava was influential in her side's second win of the competition. Photo: PHOTOSPORT

With a revised schedule and rounds two through seven being played at the Auckland Netball Centre, the Mystics and Magic produced a spirited contest in Friday's re-start of the league.

Magic made their opposites work hard for three-quarters of the match but spearheaded by towering teenaged shooter Grace Nweke, the dynamic midcourt pairing of Peta Toeava and Tayla Earle, and the experienced defensive duo of Phoenix Karaka and Sulu Fitzpatrick, the Mystics held the edge from start to finish.

Time and again, Magic rallied to close the gap but just couldn't grab the vital breakthrough.

Livewire wing attack Toeava, the experienced head in a youthful attack line, got the Mystics away to a flyer with the Auckland team posting the opening four goals.

At the other end of the court, defenders Karaka and Fitzpatrick put the brakes on Magic's scoring options.

Teenaged newcomer Asher Grapes, coming into the Mystics as a permanent replacement after Bailey Mes was ruled out for the season through injury, made a nerveless start in playing a strong supporting hand to get the ball regularly into the hands of key shooting weapon Nweke.

With 12-minute quarters replacing the traditional 15 minutes for the duration of the league due to player welfare, the Mystics held the Magic at bay to lead 11-8 lead at the first break.

Racing out to a five-goal advantage through the deft array of timing and passing skills from Toeava, the Mystics threatened to bust loose but Magic remained unrattled to level up the scores midway through the second stanza.

Matching Nweke's 1.93m frame, Magic opponent, goalkeeper Erena Mikaere, picked off some timely turnover ball but was equally matched in that department by impressive young gun Earle, who showed her value as a defensive centre for the Mystics.

Shooter Kelsey McPhee remained a consistent contributor under the Magic hoop but could not prevent the Mystics taking a 22-18 lead into the main break.

New recruit Saviour Tui took over from Grapes for the second half with immediate impact while Whitney Souness, to centre, and Ariana Cable-Dixon, wing attack, swapped positions in the Magic midcourt.

That provided a productive choice as the Magic made a forceful thrust in the third stanza, showing plenty of inventive play to close to within one.

However, the Mystics snuffed out any threat of a Magic takeover with the combined speed and intuitive feeding of Toeava and the reliable finishing of Nweke, who reeled in some exceptional ball, helping the Mystics retain their margin to lead 34-30 at the last turn.

The Premiership continues on Saturday with the Southern Steel and Mainland Tactix at 5pm.