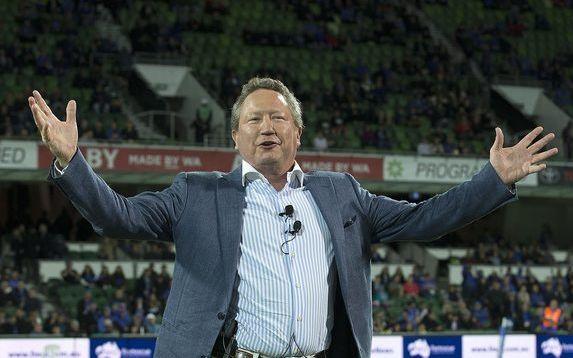 Mining magnate Forrest said he had accepted a Rugby Australia (RA) offer but stressed the arrangement was only for 2020.

RA cut the Force from Super Rugby after the 2017 season, when the competition contracted to 15 teams after its 18-team format proved unpopular with fans and broadcasters.

This year's Super Rugby campaign was suspended in March when travel curbs to contain COVID-19 made the competition untenable.

"I want what is best for rugby in Perth and in Australia and to ensure the game flourishes," Forrest said in a media release.

"My views on the mismanagement of the game under the previous Rugby Australia administration are well known and remain steadfast."

RA hailed Force's involvement and said in a media release it remained "in dialogue" with the Tokyo-based Sunwolves to also join the tournament to be held July 3-Sept. 19 in a round robin format, pending broadcasters' approval.

Forrest, who bought the Force after they were cut from Super Rugby, said he had a constructive conversation with incoming RA chairman Hamish McLennan.

"I am prepared to help out RA and new chair Hamish McLennan in a time of crisis, for the good of the sport," he said.

"Until I see evidence that reinvention is at the core of any strategic plan RA comes up with, it will be difficult to commit to a long-term investment."

McLennan said Force's commitment was a "great story" and he hoped to work with Forrest to reinvigorate the domestic game.

"We ... understand that decisions made by Rugby Australia in 2017 were painful for sports fans in Western Australia and the Force players, and we are sorry that they haven't been able to share in the rivalry against their fellow Australian teams," McLennan said.

The Force said they might have to relocate to Australia's eastern states to play in the tournament due to strict border controls in Western Australia.