The words of sailing commentator Pete Montgomery have become synonymous with that five nil drubbing of Team Dennis Conner in the final but reflecting on the feat 25 years on Montgomery says it's not the day in particular he remembers most but the decade long effort that went into achieving the ultimate prize.

The San Diego campaign was the fourth tilt at the America's Cup a New Zealand syndicate had undertaken and the key to success was that it was "very much a sailor driven campaign," said Montgomery.

Sir Peter Blake had been brought in late to the ill fated 1992 campaign when New Zealand had seemingly won the Louis Vuitton Cup and the right to challenge for the Auld Mug only to lose out under protest when the Italian syndicate successfully protested over New Zealand's use of a bowsprit.

"I remember Peter Blake telling me after 1992 'if that's the America's Cup you can stick it!'"

"He really was quite disillusioned," said Montgomery.

Blake though was persuaded to stick around and in fact help bankroll the 1995 effort by mortgaging his house.

"Now that might sound arrogant but by then he had won three or four world match racing championships... but they were confident in their own ability and there is a difference in being so arrogant that you believe your own publicity and being confident that you can handle it against some very, very good competitors." 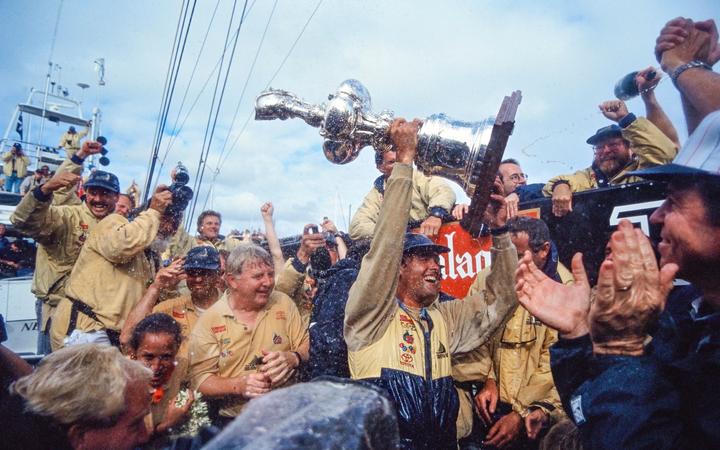 The America's Cup has always been embroiled in controversy and cat and mouse games between opponents and Team New Zealand were up there with the best in 1995.

"Fake news is a phrase we have got used to over the past few years and Team New Zealand were very good at that.

"They put out stories that there was a problem with NZL32.

"You would think that the later boat (NZL38) would be the better boat and they started with 38 and easily won in the round robin races but then they started saying it wasn't quite right and were having to go backwards and use 32... but all along they new 32 was a much faster boat."

And as for his signature call - "the America's Cup is now New Zealand's Cup", well Montgomery says it wasn't scripted.

"I did wake up that morning and put down some key points (about the decade long journey to win the Auld Mug) as I wanted to give a 60 to 90 second summary of what it meant but it was on the final leg that... it came to me 'the America's Cup is now New Zealand's Cup'.

And 25 years own Montgomery is still getting stopped in the street and asked for a replay.

"Just before our lockdown started this fellow came up to me and said 'do you know who you are?' and I said 'well I think so' and he said 'will you say it to us one more time?'

"So if a quarter of a century later a few words can put a smile on peoples' faces - especially in these times- that's pretty neat."

After winning the America's Cup in Bermuda in 2017, Team New Zealand are set to defend the trophy in Auckland next year.