Kobus Van Wyk is worried about family in South Africa and misses his mum's cooking, but the Hurricanes wing is set to make New Zealand home. 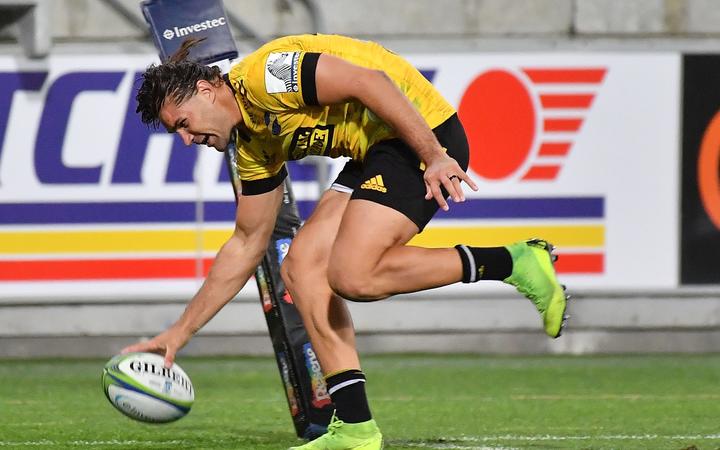 At 28, the Western Province product has already had a worldly rugby career, playing in Cape Town, France and Durban before landing in Aotearoa.

"I was born and raised in Nababeep until I was about six years old and we moved to Cape Town," he recalls.

"Schooled there and started playing rugby for Western Province and then the Stormers. I was 24 when I went abroad to Bordeaux and came back and played Super Rugby for the Sharks for another three years and now I'm in New Zealand, it's been an amazing journey."

It was clear from an early age that Van Wyk was destined to score tries.

"My mum told me that I had this one rugby jersey that I always wore, day and night, for about five weeks straight and after that she had to throw it away. It wasn't even a Springboks jersey, it was just a random rugby jersey.

"I was always playing with a rugby ball and being called a jock. It's always been a dream of mine to play for the Springboks. But my school boy and childhood dream was just to play rugby, full stop."

His peers in the Northern Province copper mining town of Nabadeep weren't as interested in chucking the oval ball around.

"They were just playing games, cruising around on their bikes and having fun and weren't that interested in rugby, whereas I was always with a ball and in my jersey," he says with a laugh.

"Nabadeep is a small town, northern cape side, a small community. My dad was working in the mine and my mum was working in the police. I haven't been back for a long time so I would really like to journey back to Nabadeep when the lockdown has finished and reconnect with home."

While Van Wyk, his wife Juné and two-year-old son Elijah have settled well in Wellington, there's plenty they miss about South Africa, with whānau and kai the top of the list.

"My family, and mum and dad's food haha. Mum makes a mean Italian chicken spaghetti, it's amazing. My dad makes a mean oxtail poitje. Potjie (pronounced poi-key) is a South African thing, a big black pot, you put all the meat and vegetables and you just chill around the fire and it cooks. After about four hours you just eat it and the meat falls from the bone. There's some pretty good food in South Africa haha.

"Though I should say my wife has been doing an amazing job of cooking and I wouldn't dare complain, I'd be hung out to dry! I shouldn't have said that, I'll be on cooking and cleaning duty for the rest of year now!"

Thanks 2019, its been a year of stretching and growing, my weakness led me to deeper strength through everything. God you are in control. I love you and thanks for always showing up when we need it most.

Van Wyk said it's been hard being away from his loved ones during the global pandemic.

"It's tough because obviously you can't do anything from here, it can be frustrating. You worry that if anything happens you can't do anything. It's been a bit of an emotional rollercoaster, but my brother has been doing all the shopping and everything for my parents, which has helped relax my mind. We just pray and hope they stay safe."

Not playing rugby or training with his team-mates has been a bitter pill to swallow, but the lockdown has silver linings, with Van Wyk getting to spend more time with his wife and son.

Happy Bday my boy, love you so much

Though keeping a two-year-old entertained for six weeks without any playdates has been a challenge.

"We've adapted pretty well. Elijah is loving it because he has his dad around all the time. I've been setting up a driving range for him in the back yard and hopefully he can play on the PGA tour one day haha."

"It was his birthday on the fifth of May so he got a few presents which are keeping him a little bit busier. We have a good back yard and a small play car where we do our Indy 500 haha, and we have the golf balls and rugby balls and soccer balls. Everyday something new.

"In the gym at home I've been doing speed work and I've got him set up and he's been copying all my workouts and he's hilarious trying to do everything.

"My wife and I have a routine, go for a walk, do some training, play with the little one. We're living in Karori so there's plenty of places to go for a nice stroll."

After making a rollicking start to his Hurricanes career, scoring three tries on debut against the Sunwolves in Napier, Van Wyk could be forgiven for feeling a tad vexed when Covid-19 brought rugby grinding to a halt.

He can't wait to pull the boots on again and still has international ambitions.

"Yeah I would still love to crack the Springboks and represent my country. Growing up in South Africa, it's every rugby player's dream to play for the Springboks and that's still my end goal. For now though I just want to get back playing rugby for the Hurricanes!"

Special having the fam there

While playing for South Africa is Van Wyk's ultimate goal, he's not moving back to the Republic any time soon.

"I can't wait to get out on the field again. My wife and son and I are loving it here, really loving it. There are such great, kind people in the team and the community that have helped us a lot, we're very grateful."

Van Wyk ended up in Aotearoa after being picked up by Hurricanes on the advice of former head coach, now All Blacks assistant John Plumtree.

"Yeah we still see each other a lot. In fact I'm going over to his house today to drop off some contactless cupcakes because we have a few left over from Elijah's birthday party."

Dropping sweet treats off to an All Blacks coach might seem a good way to increase your chances of selection, so could Van Wyk ever see himself in the famous black jersey?

"Haha, I don't think I'm eligible, but if I was those cupcakes would be a good option eh, haha."

The Nababeep flyer is keen for Super Rugby to remain a four county competition and he would hate to see South Africa leave the competition to play in Northern Hemisphere tournaments, such as Bloemfontein's Cheetahs and Port Elizabeth's Southern Kings, who play in Europe's Pro14.

All options are on the table as Sanzaar looks at the future of Super Rugby amid the coronavirus pandemic.

"It's been a tradition, especially playing between the Australian, New Zealand and South African sides. Watching the best players and coaches going against each other is what makes Super Rugby so strong. I think they'll stick with the current format and I hope Sanzaar don't cancel the competition or make it just between Australian and New Zealand teams."

Van Wyk, players and fans can now only wait and see, but one thing's for sure, the South African will be a Hurricane both this season and next.