Tiger Woods should have been trying to keep his Masters green jacket out of the clutches of the world's top golfers over the next four days, instead he will battle his 11-year-old son Charlie for it over putting competitions. 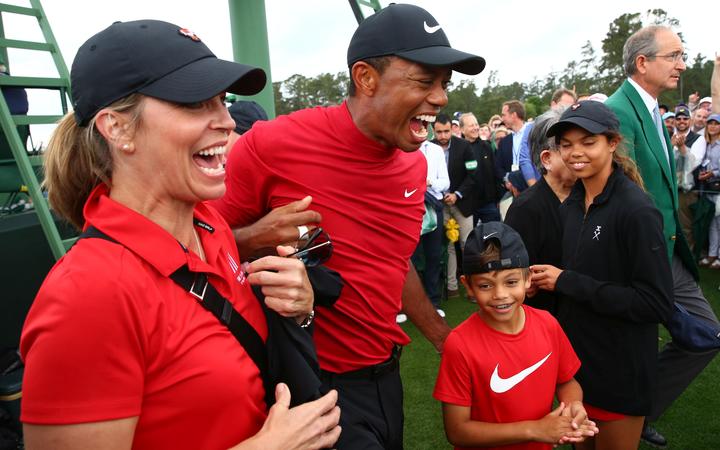 The Masters, which Woods won in magical fashion for a fifth time a year ago to claim his first major since 2008, has been postponed until November because of the coronavirus pandemic which has shut down world sport on an unprecedented scale.

Like his rivals, Woods, 44, has been kicking his heels at home, waiting for the day the PGA Tour can restart.

While he has enjoyed the family time, including 2,000-piece jigsaw puzzles and cup cakes, Woods admits being "wired" to play but not preparing for Augusta's first tee has been difficult.

His local course (Medallist) in Hobe Sound, Florida has remained open, however, and playing against Charlie has meant he can sharpen his competitive instincts.

"We've been able to go out there and compete," Woods said in an interview with Discovery-owned golf streaming service GOLFTV.

"He's got a lot better at throwing the needle at me now and he's accepting it faster and reversing it back. We have a deal, in the backyard generally every night we'll play putting matches and the winner gets to keep the green jacket in the closet.

"Occasionally it's gone into his closet. Primarily it's stayed in mine but the fact he's been able to earn it off me because there are no wins that are given in this family.

"It's been fun to see him tease me about beating me and being able to wear the jacket and have it in his closet where he says it belongs."

As a defending champion, the build-up to the Masters is unique. Not being able to host the Champions Dinner, or enjoy the par-three event held the day before, has left a void.

Woods held an improvised Champions Dinner at home with partner Erica Herman and children Charlie and Sam instead.

"We had exactly the same. We had steak and chicken pieces, sushi and sashimi," Woods, who battled back from knee and back injuries to claim his 15th major at Augusta last year, said.

"We had cupcakes and milkshakes for dessert. So it was exactly what I was going to serve. As I said, Masters Dinner quarantine style with my family.

Masters Champions Dinner quarantine style. Nothing better than being with family. pic.twitter.com/xPK769CWCf

Joking aside, Woods says the Masters postponement is tough.

"This is not the way that I would've wanted to keep the jacket for a longer period of time," he said. "I wanted to get out there and compete for it and earn it again.

"I'm wired, I've been doing it for 25 years now and so it's hard to find the wire, those circuits now, I do feel a little edgy. I want to get there and play - I want to compete.

"Fortunately, we potentially could have a Masters in November and play it then. I guess I'll be defending then and hopefully that all comes about."

Apart from playing golf with Charlie, Woods says cycling and watching his children on the tennis court in his garden have helped him stay relaxed during the lockdown.

The long injury lay-offs that have snagged his career have also helped him deal with the current situation he describes as "a war with an invisible enemy".

"I've been through episodes like this in my career with my back, where seconds seem like months, you have to slow things down and do things at a different pace," he said.

"I know it's frustrating, it's boring at times, but in the end we are trying to save lives, flatten the curve," he said. "It's not a normal world.