Latest - New Zealand have advanced to a Group One Davis Cup tie in September after stalwart Rubin Statham clinched a 3-1 win over Venezuela in the playoff tie in Auckland. 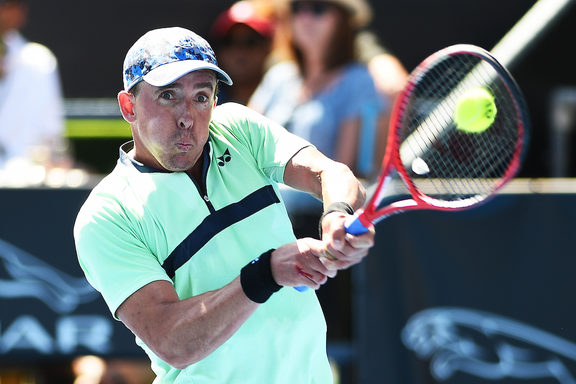 The 32-year-old Kiwi is the most experienced New Zealand Davis Cup player and stepped in for Ajeet Rai who played the opening day singles.

Statham prevailed over an ailing 20-year-old Brandon Perez who called a media time out at 1-2 in the third set and appeared hampered by cramp. He was broken to love in the next game after serving three double faults. Statham held to love and trailing 1-4 Perez collapsed on the court and couldn't continue.

Statham was playing his first competitive match in a year having been out of action with a hip injury.

The team's decided not to play the dead 5th rubber between Finn Tearney and Martinez.

Adams emerged on the global shot scene when bettering the world record at this meeting 12 months ago and later last year snared the world title in Dubai with a world record to cement her standing as the planet's leading women's F37 shot exponent.

Earlier in the week, the Waikato Bay of Plenty athlete equalled her world record of 14.80m in Brisbane and went one centimetre beyond that mark in round three on a day of lighter winds but, nonetheless, still blustery conditions at Ngā Puna Wai.

However, that was the not the end of Adams' efforts as she powered the metal ball out to 15.28m in round five to take the world record into a new realm.

The 29-year-old, who is coached by her sister and two-time Olympic champion Dame Valerie Adams, said everything clicked for that world record throw: "I was just hoping to throw well, so was really rapt to throw that out there. I wasn't aiming to throw a PB or break records or anything like that, but I knew I was in good shape.

"We attacked this like we would any other competition. The (15.28m) was good but there are always things to work on for each throw. I was happy to know what I was and wasn't doing well while throwing, and even though I wasn't able to correct (the mistakes) we were happy with that one particular throw."

Woods to skip Players Championship with back issue

Tiger Woods' Masters preparation has suffered a setback as he is unable to return to action at next week's Players Championship in Florida due to a back issue, ESPN reported.

Former world number one Woods has not competed since the Genesis Invitational in mid February where he finished last among those who made the cut and complained of back stiffness.

The Players Championship, which is widely regarded as golf's unofficial fifth major, will be played March 12-15 at TPC Sawgrass.

Woods, a two-time winner of the event, carded a three-under-par 69 in the final round last year en route to a share of 30th place before going on to capture his 15th major title four weeks later at the Masters.

The 44-year-old Woods is running out of options to get competitive rounds in ahead of the April 9-12 Masters.

Meanwhile, Jason Day's preparation for next month's Masters have taken a hit with the former world No.1 withdrawing from the Arnold Palmer Invitational citing a back injury.

New Zealand boxer Leuila Mau'u advanced to the quarter final round of the Asia-Oceania Olympic Qualifying Tournament in Jordan yesterday.

Mau'u, who has a reputation as a knockout merchant, won his super-heavy weight bout against Siyovush Zukhurov of Tajikistan on Day four.

Zukhurov was by far the more experienced fighter but it was Mau'u who won via a unanimous decision.

Elsewhere, Ariane Nicholson of New Zealand was pipped by Shinetsetseg Uranbileg of Mongolia in a thrilling women's welterweight bout.

Baturov was in control from the opening bell and earned a unanimous decision.

Australia will be without fast bowler Mitchell Starc for tonight's final one-day international against South Africa after he was given permission to leave the tour to watch his wife Alyssa Healy compete in the women's T20 World Cup final.

Healy will feature for Australia against India in the decider of the global T20 competition at the Melbourne Cricket Ground on Sunday, and will be able to count on the support of Starc.

"It's a once-in-a-lifetime chance for Mitch to watch Alyssa in a home World Cup final and so we were happy to allow him to return home to support his wife and be part of a fantastic occasion," coach Justin Langer said in a statement from Cricket Australia.

"It is something we have been talking about for a while and, given Mitch has had a considerable workload in all three formats this summer, his heading home a couple of days ahead of the rest of the squad means he will have a chance to refresh ahead of our home and away one-day internationals and Twenty20 internationals against New Zealand that will wrap up our season.

South Africa have already won the three-match series with a 2-0 lead going into the final match at Senwes Park.

Healy, who holds the record for the most runs in a Women's T20 International with 148 not out against Sri Lanka last October, will hope to help Australia win a sixth World Cup in their last seven attempts in the 20-over format.

An awful second-half performance against the Chiefs saw the NSW Waratahs lose 51-14 in Wollongong last night.

The Waratahs were ahead 14-13 at halftime, but just 25 minutes after the break found themselves 32 points behind.

NSW conceeded six tries and 38 unanswered points in the second term as the Chiefs won for the first time in NSW since 2007.

The bonus-point victory saw the Chiefs jump from seventh to first on the competition ladder.

Earlier, the Brumbies clinched their first bonus-point victory of the Super Rugby season and went top of the Australian ladder after thrashing the Sunwolves 47-14.

Coronavirus concerns saw the game relocated from Japan to Wollongong.

The seven-try victory saw the Brumbies move to four wins and one loss after six rounds, while the Sunwolves have one win from their opening five games.

Japanese swimmer Hiromasa Fujimori's appeal against the length of his doping ban has been dismissed, the Court of Arbitration for Sport (CAS) said on Friday.

Fujimori was banned for two years by the international swimming federation (FINA) after testing positive for the banned substance Methylephedrine.

The 28-year-old had requested for the sanction to be reduced, arguing that he had eaten "potentially contaminated rice balls" the day before the test.

CAS said in a statement that he had "failed to establish a plausible source to the presence of the prohibited substance in his sample."

As a result, Fujimori will serve the full two-year ban which started on Jan. 1 2019.

Fujimori won two bronze medals at the 2018 World Championships and was a silver medallist at the 2014 Asian Games.

The Brazilian was left out of the squad when Liverpool lost 2-0 at Chelsea in the FA Cup with Spaniard Adrian playing in goal instead and Klopp revealed he had injured his hip in training prior to Tuesday's game.

The German coach confirmed that Alisson would sit out Saturday's encounter as well as the second leg of their Champions League last-16 tie at home against Atletico Madrid on Wednesday.

Brazil coach Tite also left the 27-year-old keeper out of his squad for their 2022 World Cup qualifiers on March 27 against Bolivia and four days later against Peru.

Liverpool have lost three of their last four games in all competitions, falling to a 1-0 first-leg defeat to Atletico, losing their unbeaten streak in the league in a 3-0 reverse at Watford before exiting the Cup to Chelsea.

That run of results has sparked concern over their form at a crucial stage of the season.

Liverpool face a Bournemouth side who are in the relegation zone with 10 games to play but the south coast club have Joshua King, Callum Wilson and Ryan Fraser available and Klopp expects them to be dangerous on the counter-attack and set pieces.

However, Bournemouth's top scorer Harry Wilson -- who has seven league goals -- is ineligible to play as he is on loan from Liverpool.