New Zealand track cyclist Corbin Strong is bursting with pride after being crowned world champion in the men's points race. 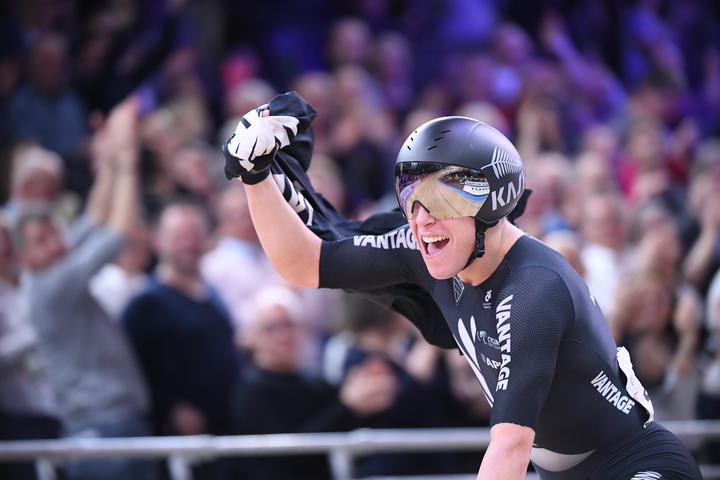 The 19-year-old Southlander, who collected a silver medal on Friday (NZ time) as part of the men's team pursuit, produced an impressive ride at the World Championships in Berlin on Saturday.

Strong put himself in contention by taking 20 points for gaining a lap on the field earlier in the 40 kilometre race and soon after that took a lead he would never relinquesh.

He sealed victory in style, gaining a lap on the field for the second time with just one lap remaining to finish 18 points clear of Spain's Sebastian Mora.

It signalled a remarkable rise for the teenage star, who won a junior world championship title in the team pursuit in Switzerland in 2018, and a year previous a bronze medal in the same discipline in Italy.

He forced his way into the elite team on the back of good performances in the World Cup campaign over the summer, just a year after emerging through Cycling New Zealand's SIT Performance Hub development programme.

"I was put under pressure a few times but fortunate it all came back together and in the last 20 laps I thought it was now or never," Strong said.

"How many opportunities do I get to race for a world title and I am in the perfect position? I just had to give it my everything and that's what I did. I was over-whelmed with emotion when I crossed the line."

In doing so Strong upset a number of experienced professionals.

"You can't afford to go to these races and be intimidated by the big names.

"I went in riding my own race, looking for my opportunities. It paid off. You can't afford to come to a world champs and act like you are an underdog.

"I just had the mentality that I had to go out there and act like I am there to win… and that's what happened. I can't believe I pulled it off. I am super-proud."

"A young kid coming through the ranks really talented that doesn't know anything better other than going hard at things, who handles himself really well with his teammates despite the fact that he is new to the group and is obviously incredibly talented and hard-working.

In other racing, Nick Kergozou qualified for the finals of the 1000m time trial, finishing seventh, while Holly Edmondston finished 16th in the four-discipline omnium.