India captain Virat Kohli had a simple and honest message for the tens of millions of fans in his cricket-crazy nation after they lost the first test to New Zealand by 10 wickets at the Basin Reserve. 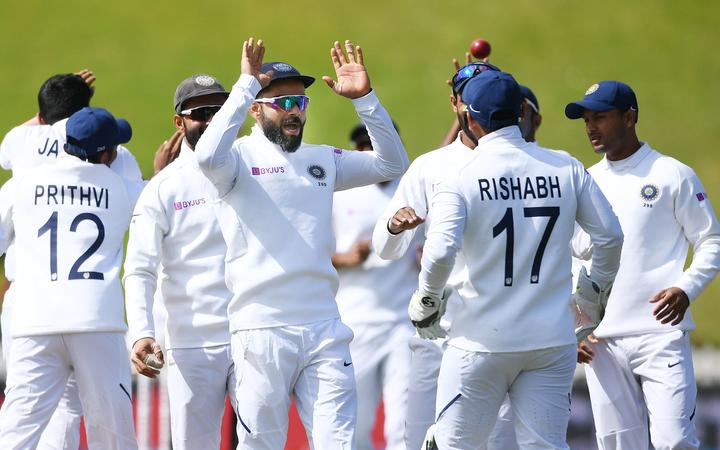 India captain Virat Kohli during one of the few moments of celebration his side had during the first test. Photo: Photosport

"We did not play good enough cricket and that's why we lost," Kohli said.

"Some people might want it to be the end of the world, but it's not. For us it's a game of cricket. We lost and we move on, we keep our heads high."

New Zealand had virtually assured themselves victory on a pivotal third day when their lower order contributed 123 runs for the last three wickets, to take their first innings to 348 and a 183-run lead.

Then they reduced the tourists to 144-4 by Sunday's close of play and upon returning for the fourth day, Tim Southee and Trent Boult claimed five of the last six wickets needed to bowl them out for 191.

It took Tom Latham and Tom Blundell just 10 balls to score the nine runs required for victory, which was India's first loss in the International Cricket Council's World Test Championship.

Kohli praised New Zealand's bowlers for their ability to build sustained periods of pressure and cramp the natural strokemakers in his side and said they had contributed to his side's collapse for 165 in their first innings.

"I think we let ourselves down, massively, in the first innings with the bat," Kohli added.

"We knew the conditions were going to keep getting better so if you get 230-240 in the first innings of the test match then you're giving your bowlers a chance and then your second innings deficit also becomes smaller."

Kohli is going through a lean run with the bat in New Zealand, having scored just 201 runs in nine innings with a high score of 51 from the first one-day international.

He scored two and 19 at the Basin Reserve but still felt he was still batting well.

"Sometimes scores don't reflect the way you are batting," he said. "If it doesn't come off, then you don't have to beat yourself up too much.

"You take pride in performing for the team and I've always done that and I'm looking forward to contributing in a win in the next test.

"It's never been about my performance on tour or about how many runs I score. It's all about if the team wins, even a 40 is good. If the team loses, then a hundred is irrelevant for me."