The Black Caps have completed a comprehensive 10-wicket victory over India before lunch on the fourth day of the first test in Wellington to give them a 1-0 lead in the two-match series. 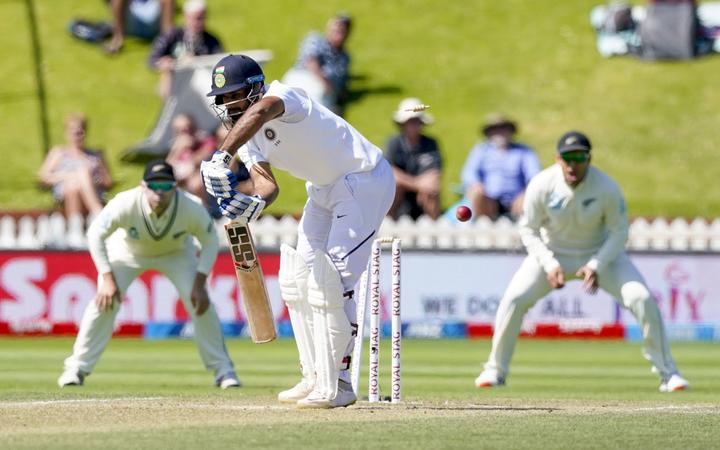 Tom Latham finished seven not out while Tom Blundell was two as they knocked off the nine runs needed for victory in just 10 balls after the visitors were dismissed for 191 in their second innings.

India lost their final six wickets for 47 runs on Monday as Trent Boult and Tim Southee combined to rip through the lower middle order and then finish off the tail. Southee completed his 10th five-wicket haul in tests with 5-61.

"It was a great win and to beat a quality Indian side is very pleasing," said Southee, who was named man of the match for figures of 9-110.

"The effort from everyone was outstanding ... and to take 20 wickets as a bowling unit was very pleasant."

New Zealand bring up their 100th win in Tests

The visitors, who had not lost any of their seven previous International Cricket Council World Test Championship matches, had started the day on 144-4, still 39 runs behind and staring at a potential first defeat.

The majority of their chances of setting a target they might be able to defend had rested with the last recognised batsmen vice-captain Ajinkya Rahane (25) and Hanuma Vihari (15) seeing out the first session unscathed.

Boult, however, put New Zealand firmly in control in his second over when he enticed an edge from Rahane when he was on 29 and wicketkeeper BJ Watling completed an easy catch.

Vihari, who had not added to his overnight score, was bowled by Southee in the next over. Southee then had Ravichandran Ashwin trapped in front for four to reduce India to 162-7.

Ishant Sharma survived two chances when he was on six with Latham dropping him at forward short leg off Boult, while Southee grassed an easy catch at short cover off Colin de Grandhomme's bowling nine balls later.

While Ishant took India past New Zealand's first innings with a four off Kyle Jamieson, he was trapped in front by de Grandhomme for 12 in the next over and then Southee had Rishabh Pant caught by Boult at fine leg for 25.

Southee wrapped up the innings on the sixth delivery with the second new ball when Jasprit Bumrah was caught in the slips for a duck.

Tim Southee is the @ANZ_NZ Player of the Match at the @BasinReserve. 9 wickets in the Test including his 10th 5 wicket haul. #NZvIND pic.twitter.com/sI0BoPfBlW

India captain Virat Kohli said being dismissed for 165 in the first innings had been crucial.

"As a batting unit we take pride in being competitive, but we weren't," he said.

"Even scoring 220-230 would've been good. That first innings put us behind and then the lead put us under more pressure."

The second match of the two-test series starts at Hagey Oval in Christchurch on 29 February.