Latest - England roared back into the Six Nations mix with another comprehensive demolition of Ireland. 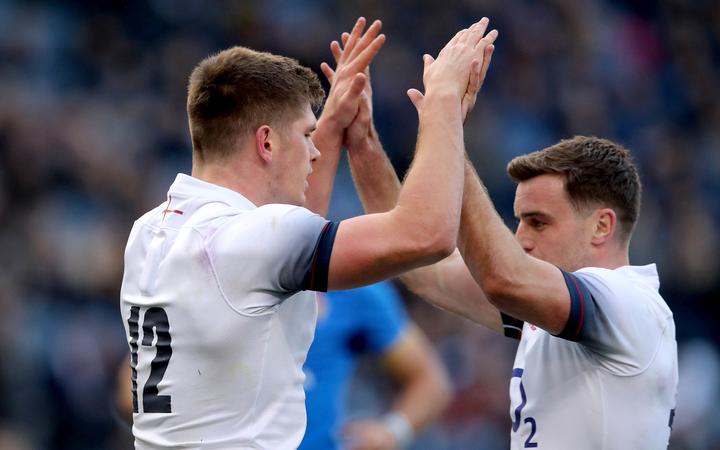 Tries by George Ford, Elliot Daly and Luke Cowan-Dickie helped the hoststo a 24-12 Twickenham victory in their best performance of the year.

Ford and Daly cashed in on Irish hesitancy when dealing with grubber kicks by Ben Youngs and Ford, while England's ferocious tackling left Ireland, who had won their opening two matches, struggling to get any sort of foothold as they trailed 17-0 at halftime.

A Robbie Henshaw try gave the Irish a brief glimmer of hope but England hit back quickly as an unstoppable maul shoved Cowan-Dickie over. Andrew Porter scrambled over for Ireland at the death but it was still a hugely important and dominant victory for Eddie Jones's side.

England's third successive big win over the Irish takes them to nine points after three rounds, having lost to France but beaten Scotland.

France, who have won their first three games, top the standings with 13 points.

Ireland have nine with Wales and Scotland on six.

Manchester United have kept alive their hopes of finishing in the top four of English football's premier league with a 3-nil home over Watford.

The win lifts United two places up to fifth three points behind fourth-placed Chelsea and one ahead of Tottenham Hotspur.

Pierre-Emerick Aubameyang scored twice to earn Arsenal a 3-2 win over Everton, extending the Gunners' unbeaten start to 2020 and moving them back into the battle for European places.

The win lifts Mikel Arteta's Arsenal side up to ninth place in the league with 37 points, while Everton remain without a victory at the Gunners in 24 years and a point adrift in 11th.

Scott on top after Adelaide

Defending Australian supercars champion Scott McLaughlin has picked up from where he left off last season, coming away from this year's first round in Adealide atop the championship points table.

Fellow New Zealander Shane van Gisbergen appeared on track to win after starting Sunday's 78-lap affair from pole and led for most of the race but had to make an extra late pit stop because his Commodore was running low on fuel.

Returning to the track, van Gisbergen spun out with four laps to go and tumbled to the back of the field.

It was McLaughlin's 44th race win and he concedes luck was on his side.

"Full credit to Shane and his team, but he really should've won that race," he said.

"They (Red Bull) had the faster car. We've got to take the luck when we can.

"But just really happy for all the Ford fans out there to get a win today on a pretty big weekend for Holden but for Ford to win is awesome."

Opener David Warner scored an unbeaten half-century in vain as Australia blew what appeared to be a comfortable chase and South Africa claimed a 12-run victory in the second Twenty20 International in Port Elizabeth.

South Africa posted a below-par 158 for four in their 20 overs as Australia strangled their bright start, but were able to defend the total as the wicket slowed up and the touring side found scoring increasingly difficult.

Warner was unbeaten on 67 from 56 balls and having reached 98 for one in the 13th over, Australia looked odds-on for the victory until South Africa found a way to cut off the boundaries and they finished short on 146 for six.

The series is level at 1-1 with the decider to be played in Cape Town on Thursday, after which the sides will contest three one-day internationals.

After a bye in the first round New Zealand squash player and World No5 Paul Coll has won his match at the men's Troilus Gold Canada Cup.

He'll face England's Daryl Selby in the last eight of the event where he was a beaten finalist last year.

South Africa's Mignon du Preez celebrated her 100th T20 match by hitting a six and a four in consecutive balls in the final over to power her team to a thrilling six-wicket win over England in the Women's Twenty20 World Cup in Perth.

South Africa appeared in a precarious position in their chase of 124, needing 33 from the last three overs, but they managed to bring the equation down to nine from six balls.

Experienced England seamer Katherine Brunt conceded only two in her first two deliveries before Du Preez sealed the win for South Africa in the Group A clash.

Natalie Sciver's knock of 50 from 41 balls helped England post 123 for eight in their 20 overs after being asked to bat first at the WACA ground.

South Africa were going well with an 84-run stand for the second wicket between captain Dane van Niekerk, who made 46, and Marizanne Kapp.

But they lost both batsmen in consecutive overs as the asking rate kept climbing in the face of clinical left-arm spin bowling from Sophie Ecclestone, who finished with 2-19.