Double Olympic gold medallist Mahe Drysdale is keeping his eyes on the long-term prize after finishing third in the single sculls at the national rowing championships on Lake Karapiro today. 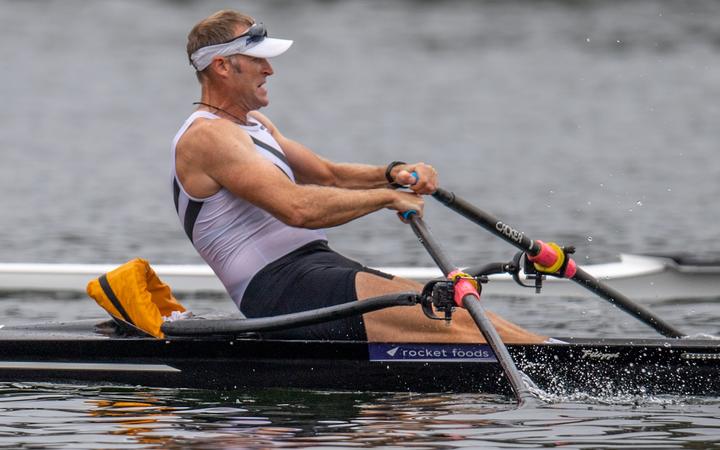 Manson had taken over the single sculls spot in 2017 after Drysdale took a year off following the Rio Olympics, but had struggled on the international scene in recent times and opted to move into the double with Chris Harris.

Two weeks ago Drysdale reclaimed the single sculls spot when he was named in the national squad, to be all but assured of chasing a hat-trick of gold medals in Tokyo.

Drysdale, 41, said he was happy with his effort today, despite the third-place finish.

"I was pretty pleased with the way I raced, especially the first half of it," he said.

"Probably in the last quarter I just started to run out of gas a wee bit but in the context of where my training's at, I was pretty pleased with the result.

"Obviously I would have liked to at least be in the silver medal position, but in the big scheme of things, those things won't matter too much down the track.

"There's some guys going pretty fast, and Robbie is a very quick athlete. It's hard to take comparisons from the results of the national champs, but if you look back at all the training I'm pretty confident with where I'm at."

Drysdale hadn't done any racing since Christmas, missing the North Island championships last month with a shoulder niggle which limited his training for two weeks.

That's history now, and Drysdale is injury-free and enjoying a good solid training bloc as he works towards the two World Cup regattas in Italy and Switzerland in May.

"We're doing a lot of base work at the moment, and that's low-rate high-force kind of work," he said.

"As we approach the World Cups, we'll get into doing a little bit higher in the rating, and just getting the body used to that sort of work.

"As you do that, it brings the speed up. In the scheme of the year, where I'm at now is good but I need to keep improving... right now I'm not in peak racing form."

Drysdale said by the time the World Cup regattas rolled around, he was confident of being much closer to his best.

"By the time I come to the World Cups,I should be in a much better spot. If I do what I think I can do there, I should get the tick through to the Olympics.

"I guess that's where I'll be fully judged, and I'm very confident I'll be where I need to be by the time I get there."