Former women's world rugby sevens player of the year Kayla Ahki (nee McAlister) is back in the Black Ferns sevens squad after a year away from the international scene.

The 31-year-old has returned from France and has her sights set on a second Olympic campaign having been part of the first ever Sevens team to play at the Olympics in 2016.

Ahki returns to New Zealand from France where she has been living with her husband, former All Blacks Sevens player Pita, and their two daughters Stella and Camille.

She last played played for New Zealand at the 2018 Dubai international tournament. 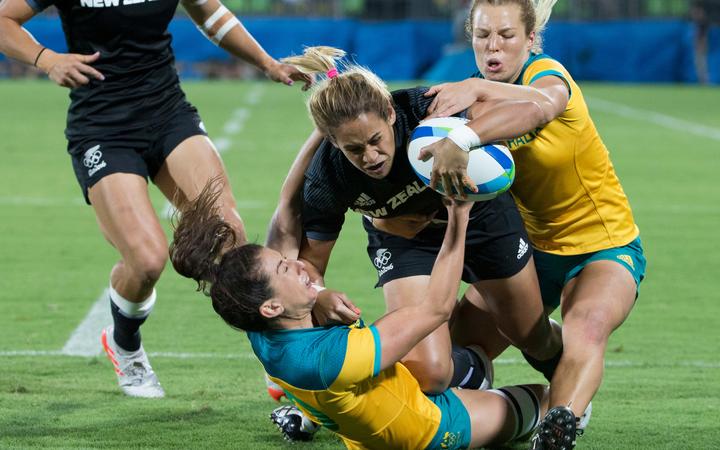 New Zealand's Kayla Ahki (nee McAlister) crashes over to score a try against Australia in the Olympic rugby sevens final in Rio in 2016. Photo: Photosport

Also returning is Shiray Kaka, who has battled with a series of injuries in recent times but has been part of the Black Ferns Sevens recent victory in Sydney and Cape Town.

Co-Coach Allan Bunting said the return of Ahki and Kaka adds to the experience within the squad, with all but one of the members of the 2016 Olympic team in the running for Tokyo.

Meanwhile the All Blacks Sevens have added Hawke's Bay winger Ollie Sapsford and 18-year-old Kitiona Vai, the younger brother of former Blues outside back Melani Nanai, to their roster.

This includes four Super Rugby players for a total of 25 contracted players in the build up to the Olympics.

The New Zealand teams lead their respective World Series competitions, both claiming titles in Cape Town and Hamilton, and the Black Ferns Sevens on a four-tournament winning streak.