The Crusaders have now won their last 11 Super Rugby games against the Blues after a 25-8 victory at Eden Park on Friday night. 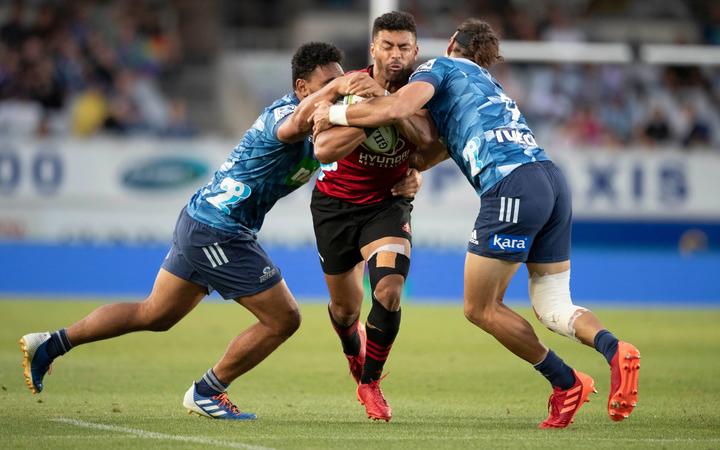 The Crusaders win streak against the Blues continues. Photo: PHOTOSPORT

The two teams have a traditional rivalry like no other and Friday night was another physical battle.

In his first start of the season Blues captain Patrick Tuipulotu crossed the try line in the sixth minute to give the home side an early lead.

There was a significant delay following the opening try as Crusaders tighthead prop Oliver Jager suffered a head injury attempting a tackle and was taken from the field.

Twenty minutes later the Crusaders wing George Bridge had given the visitors the lead after some good work off a lineout five metres from the try line.

At half time the Crusaders were ahead 11-5.

The Crusaders first five Richie Mo'unga easily sliced through the Blues defence to score under the posts five minutes after the break.

Then some fancy footwork and good hands from Crusaders back Jack Goodhue saw him through for a try before he was forced to sit down due to All Black minutes limitations.

The Crusaders had more opportunities to score but were ruled out for being offside.

Despite having all their key All Blacks back on starting duties, the Blues could not match the Crusaders on defence or attack.

The Aucklanders did put the Crusaders defence under pressure very late in the game but only scored once in each half.

The Blues lineout struggled all night and coupled with other errors on the field they will continue to frustrate fans.

The Blues have now lost 26 of their last 29 New Zealand derbies in Super Rugby.