Aaron Cruden may still have a role to play for the All Blacks this year before the Chiefs first five swaps Super Rugby for Japan's Top League, says All Blacks coach Ian Foster. 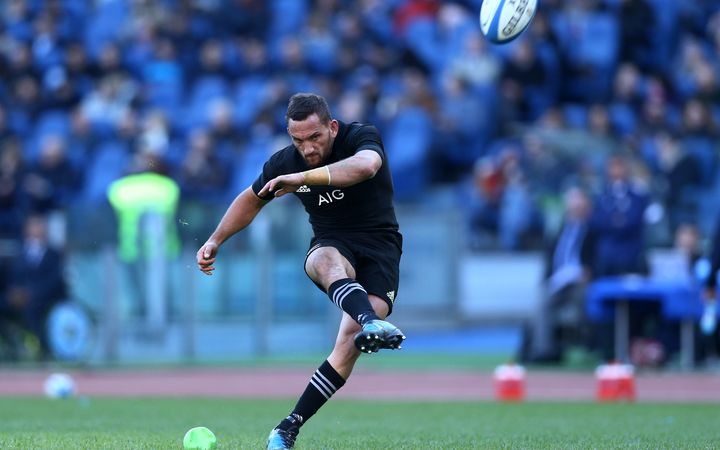 Aaron Cruden playing for the All Blacks against Italy. Photo: Photosport

The 31-year-old, who returned to the Chiefs for the 2020 season after cutting short a contract in France, will head to Kobe later this year and has played down suggestions he could be recalled to the national side.

Cruden has been in strong form in the first two weeks of Super Rugby and Foster, who watched the Chiefs beat the Crusaders at the weekend told Sky Sport he thought Cruden was eligible for tests against Wales and Scotland in July and possibly the Rugby Championship.

"I think so," Foster told Sky Sports when asked if Cruden was available for tests against Wales and Scotland in July and possibly the southern hemisphere's Rugby Championship.

"To be fair we know he's off to Japan at the end of the year and what that looks like I don't know the exact detail.

Cruden played 50 tests for the All Blacks before leaving New Zealand for France after the 2017 British and Irish Lions tour.

He was considered heir apparent to all-time great Dan Carter after the 2015 Rugby World Cup but injury saw him supplanted by Beauden Barrett.

Foster has not ruled out continuing to play Barrett at fullback in a dual-playmaker system the All Blacks utilised last year with Richie Mo'unga at flyhalf.

The Otago Highlanders' Josh Ioane, who was part of the All Blacks squad last year before making his test debut against Tonga just before the World Cup in Japan, could also be in the reckoning.

Foster, who served as Steve Hansen's assistant for eight years before succeeding his former boss last December, said he was excited about the future direction of the side.

A tough review following their World Cup semi-final loss to England had allowed him to look at what the side should be doing in the future, he added.

"Nobody in the playing group had lost a World Cup game," he said. "Now we know what it feels like, and it's not nice.

"That's got to fuel this next generation. We want to be number one, and we're not, and it hurt.

"Once we finished sulking about the World Cup we sat down and said, 'okay there was a lot of young talent on the park that day'.

"A lot of those people are coming back, so we've got to make sure we ... grow that group."