Form and fitness could keep Israel Folau on the Super League sidelines for another week. 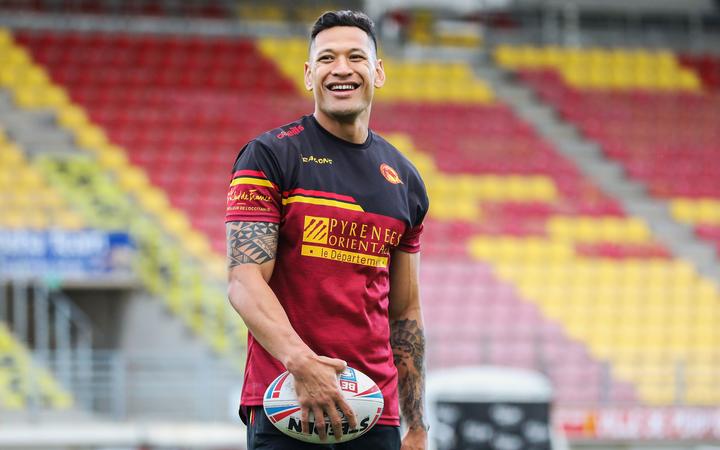 Catalans Dragons coach Steve McNamara is unsure whether Israel Folau will make his Super League debut this weekend, saying the Australian has two more training sessions to prove his form and fitness.

Folau, whose move to France attracted widespread criticism, has been sidelined since he had his contract with Rugby Australia was torn up last May for posting on social media that hell awaits "drunks, homosexuals, adulterers" and other groups.

The 30-year-old former rugby union international was left out of the Dragons squad for the postponed game against Wakefield last weekend but could feature in the home game against Castleford on Saturday.

"We're not sure," McNamara said. "We didn't take him to Wakefield, we left him here to do some more training, which he completed.

"We've got two reasonable sessions, one this afternoon and one tomorrow afternoon when we'll have a look and then we'll decide.

"It's not based on anything other than football. (He'll play) when he's ready to contribute positively to the team on the field, as simple as that, whether that be home or away."

Dragons signed Folau last month but said they did not share the player's religious beliefs.

At a board meeting last week, the Super League confirmed Folau's registration with the Dragons but voted unanimously to have "greater authority" to influence such controversial signings in the future.