The Kansas City Chiefs have captured the franchise's first Super Bowl championship in 50 years by beating the San Francisco 49ers 31-20. 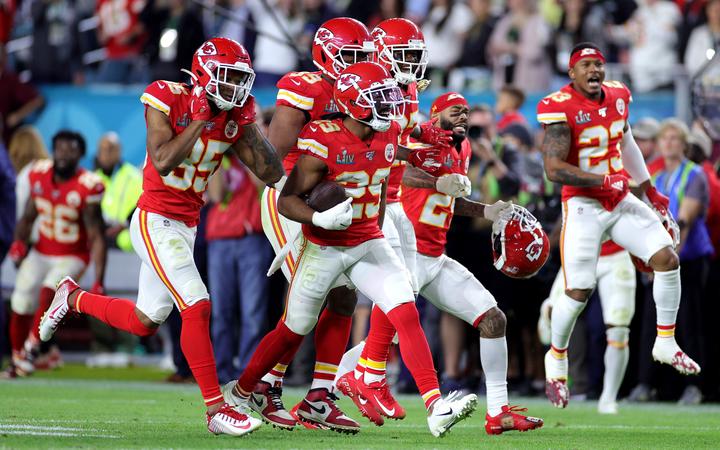 With the win, the Chiefs snapped the second-longest Vince Lombardi Trophy drought among teams that have won a Super Bowl.

Mahomes, who finished 26 of 42 for 286 yards, two touchdowns and two interceptions, was named the game's Most Valuable Player.

Things looked bleak for the Chiefs when Mahomes was sacked twice and intercepted twice in the first 18 minutes of the second half, as the 49ers gained a 20-10 lead after the score was tied 10-10 at halftime.

However, the Chiefs started their comeback on a 10-play, 83-yard drive and pulled to within 20-17 on a 1-yard touchdown pass from Mahomes to Kelce with 6:13 to play.

After a 16-yard apparent completion to receiver Tyreek Hill was reversed on replay, Mahomes connected with Hill on a 44-yard pass to the 49ers 21-yard line.

The ball went to the 1 when safety Tarvarius Moore was flagged for interference on Kelce in the end zone. Moore had registered Mahomes' second interception of the game that stopped a Kansas City drive that reached the 49ers 23-yard line.

However, the Chiefs forced the 49ers to punt after the interception, which led to the Kelce score.

The 49ers then had their first three-and-out of the game when linebacker Ben Niemann pressured Garoppolo, forcing an incompletion on a third-and-5 play.

Mahomes then engineered a seven-play, 65-yard scoring drive that featured a 38-yard completion to wide receiver Sammy Watkins to the San Francisco 10-yard line. They took a 24-20 lead on a 5-yard pass to Williams.

After Garoppolo had four consecutive incompletions, the final one on fourth-and-10, Williams ran 38 yards for a touchdown for the final points of the game.

With the score tied at 10 as the second half began, the 49ers took the kickoff and marched from their 16-yard line to the Kansas City 24 before settling for Robbie Gould's second field goal of the game. His 42-yard kick gave San Francisco a 13-10 lead with 9:29 remaining in the third quarter.

The lead was built to 20-10 after Mahomes was intercepted for the first time in his five-game postseason career.

The pick came one play after 49ers defensive end Nick Bosa knocked the ball out of Mahomes' hand on a second-and-5 play from the Kansas City 46-yard line. Mahomes recovered his own fumble, but the 7-yard loss produced a third-and-12 play, on which linebacker Fred Warner made the interception at his own 45-yard line.

49ers quarterback Jimmy Garoppolo completed three passes on the next drive for 52 yards and running Raheem Mostert scored on a 1-yard run with 2:35 left in the quarter.

The 49ers took a 3-0 lead on their opening drive, but the Chiefs regained the lead on Mahomes 1-yard touchdown run in the final minute of the first quarter.

After a 31-yard field goal by Harrison Butker gave Kansas City a 10-3 lead, the 49ers responded with Garoppolo's 15-yard pass to fullback Kyle Juszczyk, knotting the score at 10 with 5:05 left until halftime.