The Super Rugby defending champions have got their 2020 season off to a winning start, beating the New South Wales Waratahs 43-25 in Nelson on Saturday night. 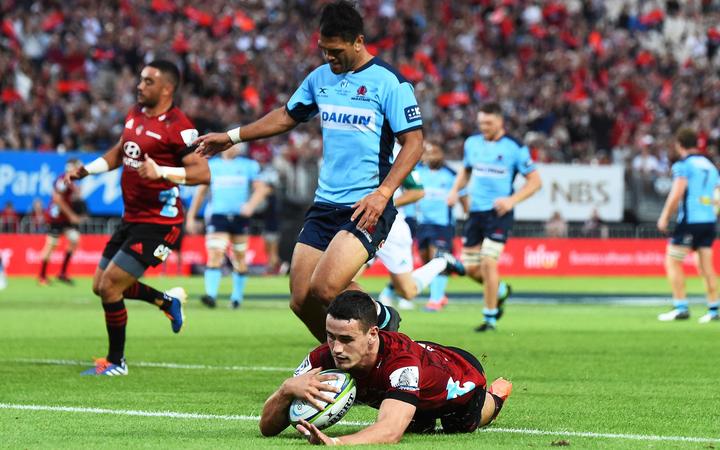 Crusaders wing Will Jordan scores a try during his side's 43-25 win over the Waratahs in Nelson. Photo: Photosport

The Crusaders opened the scoring with a penalty kick to hometown hero David Havili in the 10th minute and never relinquished the lead for the rest of the match.

Wingers Will Jordan and Leicester Faingaanuku and midfielder Braydon Ennor all scored tries in the first half, while Waratahs first five Will Harrison kept his side in the match early with two penalties.

By halftime the Crusaders had a 24-6 lead and looked to be cruising as first five Richie Mo'unga kept the visitors guessing with his pin point cross field kicks and deft passing.

Look back at how the match unfolded here

However, it was the Waratahs who came out fighting in the second half. Midfielder Kurtley Beale showed off why he's one of the best in the business with slick footwork to help set up the first try for winger Mark Nawaqanitawase in the 56th minute.

The winger then scored again just two minutes later through an intercept, running 60 metres to grab a double and pull the Waratahs back to within six points of the Crusaders.

That would be as close as they got though with the Crusaders kicking it up a gear in the final 20 minutes. Both Braydon Ennor and Will Jordan scored again to record two tries each thanks to some smart play out wide. Then, with five minutes to go, replacement lock Luke Romano scored under the posts after barraging his way through the Waratahs defence following a lineout.

A try in the 79th minute to winger Alex Newsome was a consolation for the Waratahs, who were soundly beaten 43-25.

The match wasn't without its flaws, the Crusaders still showed signs of post-break rust on a balmy February night in Nelson, coughing up plenty of mistakes on attack, as did the Waratahs.

The bonus point win lifts the Crusaders to the top of the New Zealand Super Rugby conference, one point ahead of the Chiefs.

Meanwhile, Japan's Sunwolves opened their final season in Super Rugby with a bang, running in five tries for a deserved 36-27 victory over the Melbourne Rebels in Fukuoka.