Five days after Kobe Bryant and his daughter Gianna were among nine people killed in a helicopter crash in Southern California, the Los Angeles Lakers suited up Friday night for their first game since the legend's death. 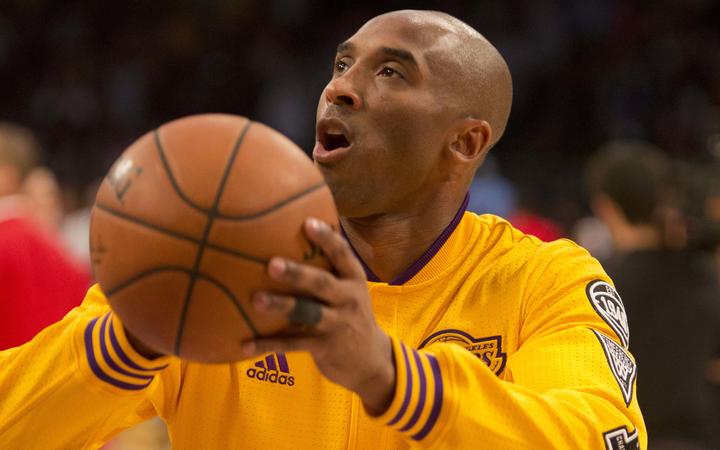 With the eyes of not only basketball but the entire sports world and beyond focused on Staples Center, the Lakers paid tribute to the nine lives lost Sunday, and they honoured their fallen hero with a taste of Hollywood flair before their game against the Portland Trail Blazers.

After the Lakers players took to the floor for warmups wearing the Nos. 8 and 24 - both numbers hanging in the rafters in honour of Bryant - the lights in the arena went out, and fans awash in a sea of cell phone lights began chanting "Kobe! Kobe!"

And each time the lights went out, those chants would break out.

The Lakers then put the names of all nine people killed in the crash on the Jumbotron, then after brief comments from the public address announcer, the arena recognised a 24.2-second moment of silence. Gianna Bryant wore No. 2 in her youth games.

James then took the microphone and addressed the crowd.

He began by reading the names of all nine people lost when the helicopter that was on its way to a youth basketball tournament crashed into a hillside in Calabasas, California.

Kobe Bryant, 41, was a coach for the team on which Gianna, 13, played. Orange Coast College baseball coach John Altobelli, 56; his wife, Keri; and their daughter Alyssa, 14 - who played on the same club team as Gianna Bryant - also were killed. Christina Mauser, a 38-year-old who was the top assistant coach of the Mamba girls basketball team, was also killed in the accident, as were Sarah Chester, 45; her daughter Payton Chester, 13; and pilot Ara Zobayan, 50.

James then dropped the speech he had written and instead told the crowd, "Laker Nation, I would be selling y'all short if I read off this (stuff) so I'm going to go from the heart."

"This is a celebration of the 20 years of the blood, the sweat, the tears ... the determination to be as great as he could be," James continued. "Before we get to play ... Kobe is a brother to me, and from the time I was in high school, to watching him afar, to getting in this league at 18, watching him up close - all the battles that we had throughout my career - the one thing that we always shared was that determination to just want to win, and just want to be great. And the fact that I'm here now means so much to me.

"I want to continue along with my teammates, to continue his legacy, not only for this year but for as long as we can play the game of basketball that we love because that's what Kobe Bryant would want.

Then came pregame introductions, where every member of the Lakers was introduced the same way:

The Lakers wore a "KB" patch on their jerseys, and that same emblem - along with Bryant's retired Nos. 8 and 24 - were emblazoned on the court. Fans on one side of Staples Center were given No. 8 Bryant shirts to wear while fans on the other side got No. 24 shirts.

The Lakers organisation also left empty the seats Kobe and Gianna Bryant sat in when they attended games, each draped in a jersey with a bouquet of roses on the seat.

When the game began, the Lakers won the opening tip and, like much of the NBA this week, took a 24-second violation. The Blazers then returned the favour and took an eight-second violation.

The Lakers opened the scoring on their second possession, Davis blocking Damian Lillard's three-point attempt, James snatching the ball out of the air and sending a pass the length of the court to Davis for a dunk.

The Lakers were originally scheduled to play the Los Angeles Clippers on Tuesday, but the NBA agreed to postpone the game as the Lakers players were not ready to play.

Trail Blazers forward Carmelo Anthony, a close friend of Bryant and with whom he won two Olympic gold medals, did not play in Friday's game, with the team calling it "personal reasons." Lillard said that Anthony "was not ready," and a report in The Athletic said Anthony could not play "because of his continued grieving and emotions over the loss of Bryant on Sunday."

Bryant won five NBA championships for the Lakers and amassed a number of accolades. He was the NBA's Most Valuable Player in 2007-08, a 15-time All-NBA selection, 18-time All-Star and 12-time All-Defensive team member. He twice was named MVP of the NBA Finals and was the All-Star Game MVP four times.