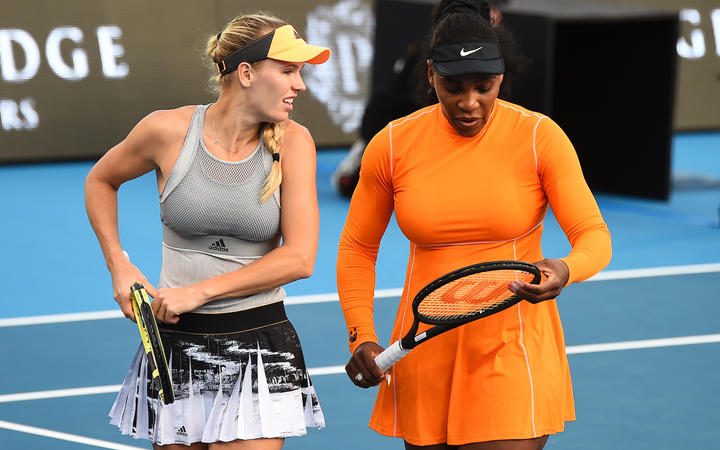 Caroline Wozniacki and Serena Williams during their doubles match against Johanna Larsen from Sweden and Caroline Dolehide during Day 3 of the 2020 ASB Classic Womens. Photo: Chris Symes / Photosport

The 38-year-old, who said she would donate all her prize money to Australian bushfire relief funds, and good friend Caroline Wozniacki were beaten by American duo Asia Muhammad and Taylor Townsend 6-4, 6-4.

The result meant that Wozniacki was unable to complete her own fairytale farewell to a tournament with which she has become synonymous, having played in Auckland every year since 2015.

The 29-year-old Dane, who was beaten by Pegula in the singles semi-finals, is retiring after the Australian Open, which runs from 20 January to 2 February.

"I have loved coming back here," Wozniacki said after tournament organisers made a special presentation before the doubles trophy was given to Muhammad and Townsend.

"Serena, thank you playing doubles with me, it has been so much fun and the only regrets I have is that we didn't do this sooner.

"I have had such a blast and it is rare that I have this much fun on court and it was a really fun way to finish off in Auckland."

Williams' singles victory, however, gave the American her 73rd WTA title and broke a near three-year drought, despite having appeared in five finals since she clinched her 23rd Grand Slam crown with a win at the Australian Open in 2017.