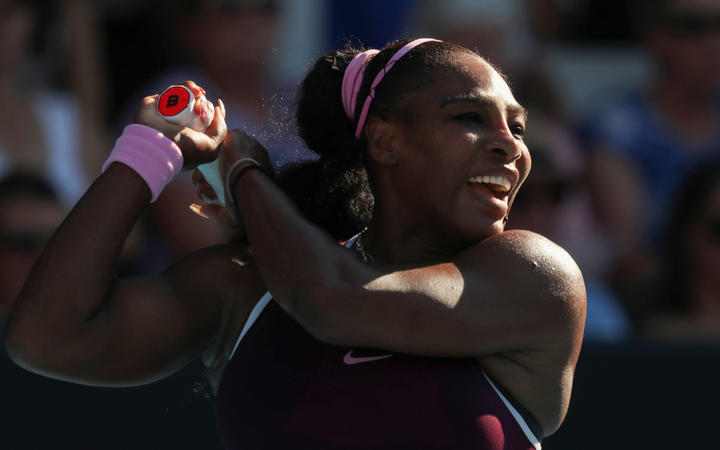 Serena Williams of the US hits a return against compatriot Jessica Pegula in their women's singles final match during the Auckland Classic tennis tournament in Auckland on January 12, 2020. Photo: Michael Bradley / AFP

The 38-year-old Williams now has the opportunity to sweep both titles at the Auckland Tennis Centre, having also advanced to the doubles final with good friend Caroline Wozniacki.

They will face the American duo of Asia Muhammad and Taylor Townsend later today.

The victory gave Williams her 73rd WTA title and broke a near three-year drought, despite having appeared in five finals since she clinched her 23rd Grand Slam crown with a win at the Australian Open in 2017.

Williams is chasing Australian Margaret Court's record 24 Grand Slam singles titles, but has lost two Wimbledon and two US Open finals since her 6-4 6-4 victory over elder sister Venus in Melbourne.

She had struggled for consistency earlier in the week, but sent an ominous message to the field at this year's Australian Open that starts on 20 January when she demolished promising teenager Amanda Anisimova 6-1 6-1 in 45 minutes in their semi-final.

Pegula, who began the game with a heavily strapped left thigh, still put Williams under immense pressure at the outset and took a 2-0 lead.

She could have held a 3-0 advantage had the 38-year-old not fought off four break points to get on the board.

While Pegula held her next service game, Williams, who was becoming angrier and angrier with herself, found her range to reel off the next five games by winning the important points and seal the first set in 51 minutes.

Pegula managed to hold in the first game of the second set, but Williams then ran through the next three to give her the advantage. When she held serve to love in the sixth game the result was all but sealed.

Williams raced through the final game to love, sealing the title with a backhand winner down the line, and lifted her arms in prolonged celebration.

Runner-up Pegula told the crowd she had had an amazing week, which she hoped would set her up for tennis campaigns throughout 2020.

Turning to Williams she said: "You are an amazing champion. It has been so fun to step on court with you today."

Williams announced after the game she will donate her prize money from winning the title to help provide relief from devastating Australian bush fires. 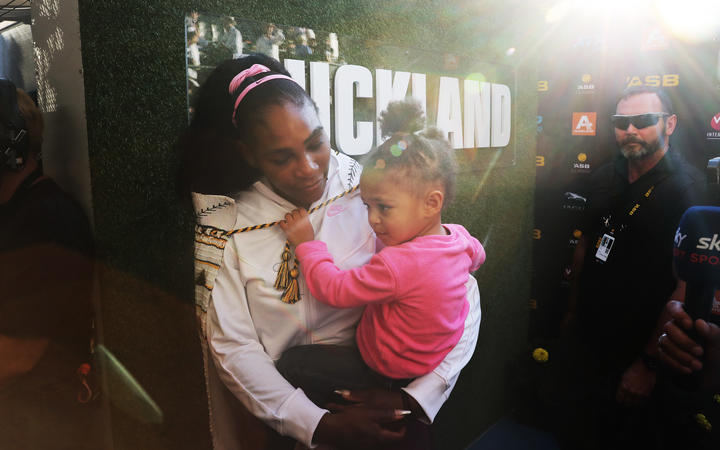 Serena Williams wrapped in a korowai with her daughter Alexis Olympia after her win against Jessica Pegula of the US during their women's singles final match at the Auckland Classic tennis tournament on January 12, 2020. Photo: Michael Bradley / AFP

In an emotional presentation she said would donate all of the $US43,000 prize money - NZ$64,000 - and her dress from every match she played in Auckland for fire relief.

She told the Auckland crowd she had been playing in Australia for more than 20 years and had been moved by the plight of people and animals facing devastating bush fires there.

She had decided from day one of the Classic to make a donation.

Williams was also presented with a korowai to commemorate her win at the ASB Tennis Classic and honour Māori tennis trailblazer Ruia Morrison.

Morrison won the title six times and competed at Wimbledon four times. She was able to travel to compete because of an avalanche of donations by Māori around Aotearoa.

After her singles win, Williams waved to her daughter and husband, Alexis Ohanian, watching from the stands.

Taking the microphone, she acknowledged her staff and coach who had constantly challenged her to be better and pointed to her husband and daughter watching on; "She is so cute" she said.

Williams said it was important for her to help inspire young women to play tennis and excel.

The title win means she has won a WTA title in each of four decades, starting in 1999.

Over the week, Williams has won some hard-fought tennis matches but also won over a New Zealand public who were unconvinced by her outing in 2017 when she crashed out in the second round, blaming "atrocious conditions".

Williams thanked the crowd and organisers for their support in putting on the Classic.