Britain's Anthony Joshua beat Andy Ruiz Jr on a unanimous points decision in a heavyweight world championship rematch in Saudi Arabia to seize back the titles he lost to his Mexican-American opponent in a shock upset last June. 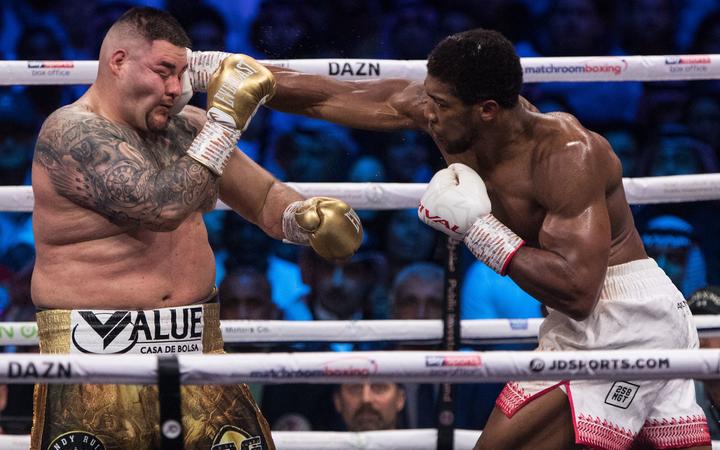 Andy Ruiz (L) gets punched in the head by Anthony Joshua (R) during their world heavyweight title fight in Saudi Arabia. Photo: AFP

Look back at how the fight unfolded with RNZ's liveblog.

The 'Clash on the Dunes' in Diriyah was for the IBF, WBA, WBO and IBO titles.

"It was his night, man," said Ruiz as his six-month reign ended in the 15,000 seat arena on the outskirts of the capital Riyadh.

The decision to take the fight to Saudi Arabia had been criticised by human rights campaigners but Joshua complimented the hosts and welcomed Ruiz's suggestion that there should be a third encounter.

"If you heard, we're going to do it a third," said the champion.

Ruiz had stopped the previously undefeated Briton in the seventh round at Madison Square Garden but there was to be no second bolt of lightning from the man in the golden gloves and shorts.

He suffered a nasty gash over his left eye early on, with Joshua also bloodied on the brow in the second round to keep the cornermen busy to the end.

As the fight went into the second half, Ruiz was looking frustrated and was warned for illegal blows.

The eighth was more promising, with Joshua momentarily appearing vulnerable, but the Briton took back control and by round 11 had a spring in his step, looking fresh and nimble on his feet while using his height advantage to good effect.

Ruiz knew he needed a knockout but it never came.

Joshua, now with a record of 23 wins and one defeat, had described that June defeat - to a flabby-looking opponent drafted in as a late replacement - as no more than a "minor setback".

While he made light of it again in victory, he was clearly relieved.

"Man, the first time was so nice, I had to do it twice," he told the crowd.

"I'm used to knocking guys out but last time I realised 'hang on a minute, I hurt the man and I got caught coming in'. I gave the man his credit. I said to myself I'm going to correct myself and come again."

Another loss in the early hours of Sunday would have put the 2012 Olympic super-heavyweight champion's career on the line, with some saying after the last fight that he was finished. 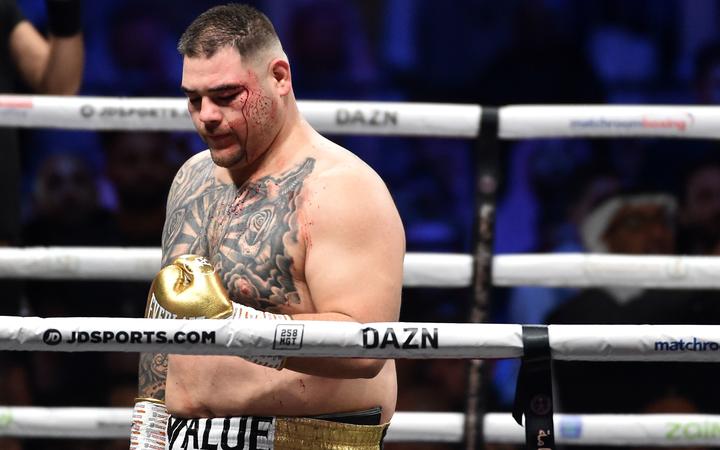 Andy Ruiz Jr walks back to his corner during his world title fight with Anthony Joshua in Saudi Arabia Photo: AFP

Joshua had shown with his preparations, however, that he meant business - stepping into the ring lighter than ever and more than three stones less than Ruiz who had weighed in considerably heavier than in their first showdown.

The contrast between the two men was a talking point before the fight, with one British boxing writer noting that while Joshua sported a six-pack, his opponent appeared to have consumed one.

Ruiz, embraced by Joshua afterwards, said he would do it differently next time.

"I think I didn't prepare it how I should have. I gained too much weight but I don't want to give no excuses. He won, he boxed me around," he said.

"If we do the third, I'm going to get in the best shape of my life."