The New Zealand track cycling team has won two further medals on the final day of the World Cup meet in Hong Kong. 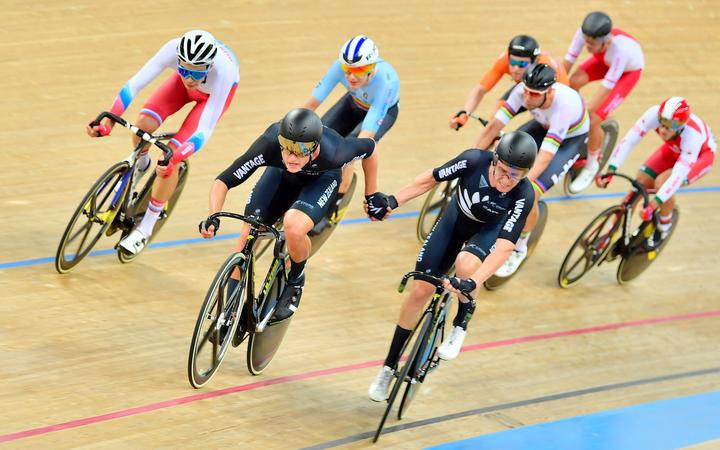 Campbell Stewart & Tom Sexton on their way to claiming silver in the men's madison at the World Cup in Hong Kong. Photo: Guy Swarbrick

The pairing of omnium world champion Campbell Stewart and Tom Sexton snatched silver in the men's madison behind world champions Germany, while Corbin Strong claimed bronze in the scratch race.

It brought the medal tally for the New Zealand team to seven, earning the award as leading nation at the competition.

"We went there to get ranking points in the key Olympic events and in the main we have exceeded expectations in that regard," Cycling New Zealand High Performance Director Martin Barras said.

"The endurance riders performed very well in team pursuit, omnium and madison competitions which was an important start for our campaign. And all of those riders, many of them young cyclists, impressed us.

"The riders coming in to the competition this week in Cambridge now have their opportunity to show their abilities.

"The win by Callum Saunders in the keirin was the pick of our sprint events. As a newcomer, he beat the "who's who " of international sprinting.

"Our team sprints in both male and female have some adjustments to make before what is a very important few days of competition on their home track at the Avantidrome this week."

Drummond was pipped for third place in the final sprint by Belgian Jolien D'Hoore which left the two riders equal in third place on 106. D'Hoore took out the medal by virtue of her higher placing in that final sprint.

Earlier Natasha Hansen finished eighth overall in the women's keirin competition, while there was no fairytale finish for men's keirin winner Callum Saunders, who clocked a personal best 10.050 in qualifying for the men's individual sprint but was beaten by Nicholas Paul (Trinidad & Tobago) in the first round.

All attention now shifts to New Zealand with the Avantidrome in Cambridge hosting the fourth World Cup of the season, with over 500 riders and staff from 46 nations competing. Several teams have already arrived with competition starting on Friday.