Mitchell Santner scored his maiden Test century and then grabbed three quick wickets to reduce England to 55-3 at the close of play on the fourth day of the first Test at Bay Oval on Sunday. 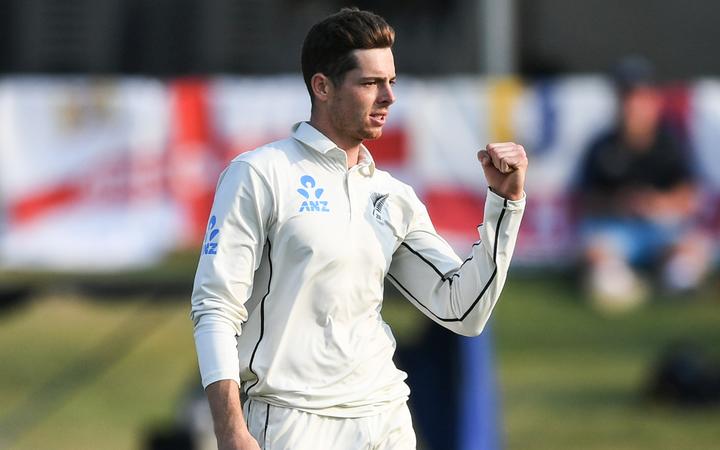 England are still 207 runs behind New Zealand's first innings of 615-9 declared and need to bat the entire final day in Mt. Maunganui on Monday to save the match.

Joe Denly was on seven, while Joe Root will join him on Monday after nightwatchman Jack Leach was caught in close for a duck off Santner with two balls remaining in the day's play.

Left-arm spinner Santner had earlier removed openers Dom Sibley for 12 and Rory Burns for 31. He finished the day with figures of 3-6 off 8.4 overs.

Captain Kane Williamson had closed New Zealand's first innings with a 262-run lead about 15 minutes after the tea break with wicketkeeper BJ Watling having scored his first test double century.

Watling was eventually dismissed for 205 and, having batted for just over 11 hours, he did not take the field for the first hour of England's second innings with Tom Latham taking the gloves temporarily.

The 34-year-old Watling, however, took a sharp catch when he did return to dismiss Sibley off Santner. The catch was a milestone in itself, with the last 101 wickets taken by New Zealand at home all falling to pace bowlers.

Todd Astle was the last spinner to take a wicket at home, against England in March 2018.

Santner struck again with less than three overs remaining when Burns mistimed a sweep and spooned a catch to Colin de Grandhomme at square leg, bringing Leach to the wicket before he fell in the final over.

The 27-year-old Santner had earlier also scored his maiden test century as he combined with Watling for a 261-run partnership, a New Zealand record for the seventh wicket, as the hosts dominated the fourth day's play.

While the pitch is still playing relatively well, some deliveries are jumping off a length and Santner is starting to extract some turn, which could prove crucial on Monday.

The second match of the two-test series is at Seddon Park in Hamilton from November 29 to December 3.