The All Whites have faded after a promising start against the Republic of Ireland, beaten 3-1 after taking the early lead in Dublin. 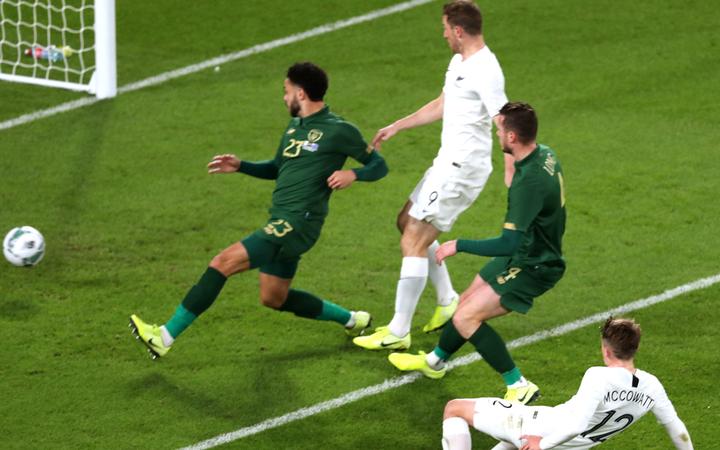 Ireland coach Mick McCarthy's focus was centred on his team's vital European championship qualifying match against Denmark on Tuesday, and there was a fresh look to his squad against New Zealand.

Nonetheless, the All Whites were under seige right from the first whistle, and could manage only the rare foray into Irish territory.

But the New Zealand defence, well marshalled by skipper Winston Reid, held firm as the visitors worked their way back into the match.

Still somewhat against the run of play, the All Whites broke through as the half hour mark ticked over.

Chris Wood and Ryan Thomas combined to release Liberato Cacace down the left, who unleashed the perfect cross for debutant and Wellington Phoenix teammate Callum McCowatt to slot home.

The New Zealanders looked set to take a 1-0 lead into half-time, but Ireland equalised on the stroke of half-time, Derrick Williams leaping high to send home a Robbie Brady corner with a bullet header.

Reid, who hasn't been a part of the team for a couple of years, managed a solid first half in his return to competitive football after 18 months on the sideline through injury. He was replaced in the second half by Bill Tuiloma, and the All Whites defence struggled to readjust.

It took just seven minutes from the restart for Ireland to hit the front, Sean Maguire given a little too much room and firing home from long range.

Callum Robinson made it three after 75 minutes, making no mistake with a clinical finish of Lee O'Connor's pinpoint cross.

It was the All Whites first game since June last year, and coach Danny Hay's first as match in charge.

The team now travel to Vilnius, where they play Lithuania in three days.