The Black Caps have won the third T20 cricket international against England in Nelson by 14 runs, giving them a 2-1 series lead in the five match series. 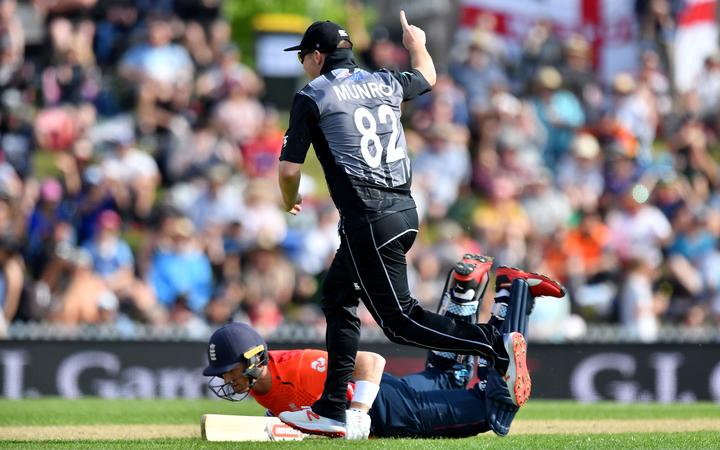 A tight finish was looming before the Black Caps took the win.

New Zealand fast bowlers Blair Tickner and Lockie Ferguson shared four wickets to trigger an England batting collapse that helped the hosts to a thrilling 14-run win in the third Twenty20 international at Nelson on Tuesday.

The victory gave the Black Caps a 2-1 lead in the five-match series.

The teams now head to Napier for the penultimate match on Friday, which England must win to keep their hopes of winning the series alive.

Ferguson and Tickner finished with identical figures of 2-25 while all-rounder Colin de Grandhomme was Man of the Match for his knock of 55 from 35 balls, which helped the team post 180-7 after they opted to bat first.

England opener Dawid Malan gave a fitting reply for the touring side with a 34-ball 55 with James Vince keeping the team firmly on course in the chase with 49.

England captain Eoin Morgan smashed Mitchell Santner for two sixes in successive deliveries before holing out in the deep against the left-arm spinner, which started the collapse as England lost five wickets for 10 runs.

"I think that's one that got away from us," Morgan said.

"We were in control for the whole chase until we were three or four down, probably the lack of experience in the chase cost us. But the guys need to play more games, need to get into situations like that."