South Africa have no secrets, so England coach Eddie Jones need not look for any Springboks training footage ahead of their Rugby World Cup final clash in Yokohama on Saturday. 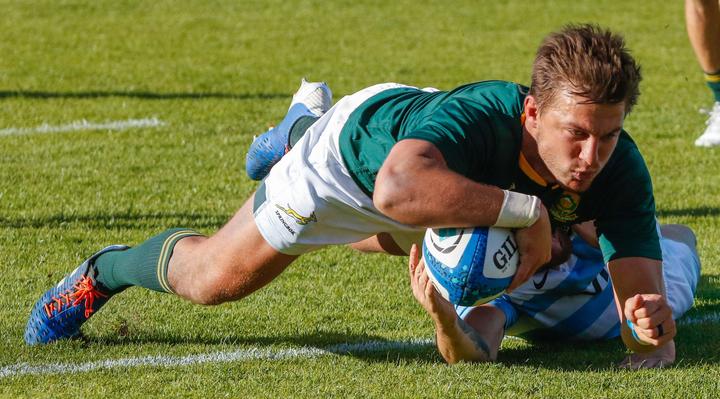 Jones made accusations of someone spying on his team earlier in the tournament, but South Africa have no such concerns with their opponents knowing what to expect.

Win the ball. Get halfback Faf de Klerk to kick it to put pressure on the England backs. Then smash anyone wearing white.

"We have still got a few things that we can throw at them," Springboks first five-eighth Handre Pollard told reporters on Friday, when asked if they had been concealing a more attacking style of play to unleash in the final.

"(But) there are no big secrets with either of these sides.

"In general the DNA, what we believe and what they believe is not going to change in a week's time. That's what got us here and it's what got them here.

"We won't be going away from something that we know.

"We may have a couple of trick plays on the day but mostly it will stay the same for both sides."

Pollard, who was impressed with his opposite George Ford's performance in England's 19-7 semi-final victory over New Zealand, said the side had not prepared to concentrate on solely shutting him down.

Instead the battle of the collisions and the advantage line would continue to be the key area of focus for their side.

"If you have gain line (superiority) then it's pretty easy for any flyhalf if you're on the front foot all the time. Well it's not easy, it's easier," he said.

"So it's up to us to stop momentum at the gain line. It will be a line in the sand and we will be trying to stop them getting over it."

Pollard, who competed in three under-20 world championships and won the title in 2012 and lost the final to England in 2014, admitted that he was thriving on the pressure of appearing in his first senior World Cup decider.

"I love it. That's why you train and put in the hours and when you're a little boy in the back yard thinking that this kick will be for the World Cup final and all those scenarios, that's what you have prepared your whole life for," he said.

"There will be pressure. It's going to be tough. But you have to embrace it and enjoy it.

"I just think the side that takes all that energy and puts it in the right direction will win.

"That will be the secret."