The All Blacks will this afternoon name their team to play England in Saturday night's rugby world cup semi-final in Yokohama and Scott Barrett appears set to start at blindside. 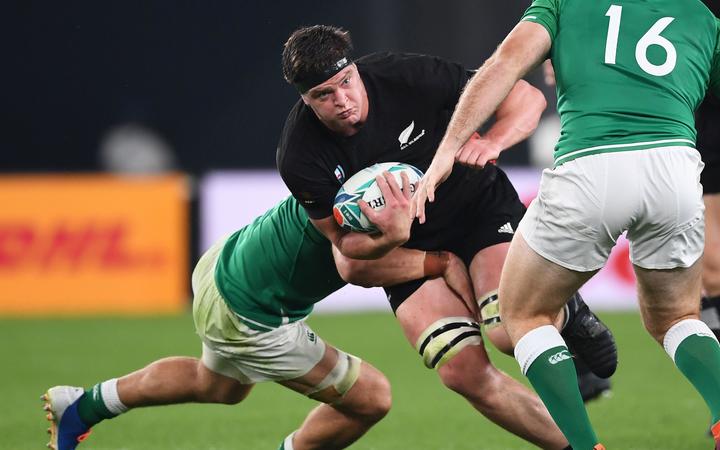 Barrett's extra size would be key to counter the size and strenght of the England pack.

RNZ understands that Barrett will take the number six jersey, with Ardie Savea moving to the openside and Sam Cane dropping to the bench.

Scott Barrett came on at half time of the All Black's quarter-final win over Ireland and Sam Cane left the field at the same time.

Cane would replace the injured Matt Todd on the bench, while Patrick Tuipolotu is set to come into the reserves as lock cover.

Our rugby reporter in Japan, Joe Porter, says Barrett provides a style that Jerome Kaino did at the last World Cup.

"His inclusion will be to counter the size and strength of the England pack, they're very strong defensively and have pushed other teams around at set piece so Scott Barrett, who is naturally a lock, offers a better lineout option than Ardie Savea or Sam Cane."

"Barrett also provides more grunt in the scrum and again more grunt when it comes to the breakdown with a bigger more physical body and is more niggly than a traditional fetcher like Cane."

His bulk will be needed against a brutish England pack who will be attempting to slow down the All Blacks ball."

Skipper Kieran Read missed training on Tuesday with a calf complaint but is expected to be named at half past three with the captain sitting out the training as a precautionary measure.

The rest of the team remains the same to the one that put Ireland to the sword in the quarter-finals.

Ryan Crotty looks set to miss out again with Anton Leinert-Brown and Jack Goodhue in the midfield with Sonny Bill Williams providing cover and impact from the bench.

Codie Taylor is likely to start at hooker, with Dane Coles in the reserves.

Jordie Barrett appears set to keep his spot as outside back cover on the bench ahead of Ben Smith.