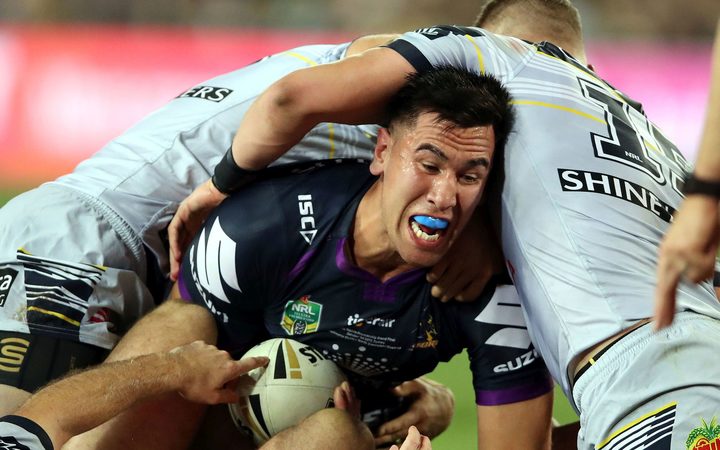 Asofa-Solomona landed back in Australia on Monday from Bali and met Storm officials hours later over an alleged end-of-season incident in the holiday spot.

The club has since passed that information on to the integrity unit, with the Storm refusing to state their position until investigations are complete.

It came after footage emerged on Sunday night of a man resembling the hulking forward throwing numerous punches in a brawl outside a Bali restaurant and bar.

Storm coach Craig Bellamy said before Monday's meeting he believed Asofa- Solomona had been provoked, standing up for Melbourne teammate Suliasi Vunivalu who is thought to have been king hit.

Regardless, Asofa-Solomona is due to run out for the Kiwis in their Test against Australia on Friday week in Wollongong, before two matches at home against Great Britain.

"That's what it's there for. That's all we can say at the moment. No doubt, we will have conversations and look after that in due time.

"I'm not going to assume anything. They'll make sure they are thorough in what they go through. I'm sure the integrity unit will do that."

If the 23-year-old was suspended, it would come as a massive blow for the Kiwis, already without injured forwards Jesse Bromwich and James Fisher-Harris.

Asofa-Solomona, having played just five Tests, would have been a guaranteed starter, with Jared Waerea-Hargreaves, Leeson Ah Mau, Braden Hamlin-Uele and Isaac Liu the other middles in their 19-man squad.

New Zealand have typically taken a hardline stance on player behaviour, having previously taken the captaincy off Bromwich and suspended him and Kevin Proctor over a drugs scandal.

Asked if he was disappointed after seeing the video, Maguire said: "Unless you know what's happened, I don't think it's fair you make comment.

"Everyone has seen it and, no doubt, I'm sure when everyone has calmed down, there will be disappointment there. But you've got to understand the circumstances."

Asofa-Solomona told the Seven Network in Melbourne he had his own story to tell over the incident.

Bellamy also insisted he wouldn't have expected Asofa-Solomona to act in that way unless he was provoked or standing up for a teammate.

"He's not a guy who goes looking for trouble," Bellamy told The Daily Telegraph.

"He's never been in trouble for anything physical that I'm aware of.

"It's disappointing but, as far as we know, Suli (Vunivalu) copped the king hit and Nelson has reacted.

"That's all we know until we actually talk to him this afternoon."

No charges are believed to have been laid over the incident.

The incident comes after the NRL's off-season from hell last summer, prompting the game to introduce the no-fault stand-down policy for players charged with serious offences.