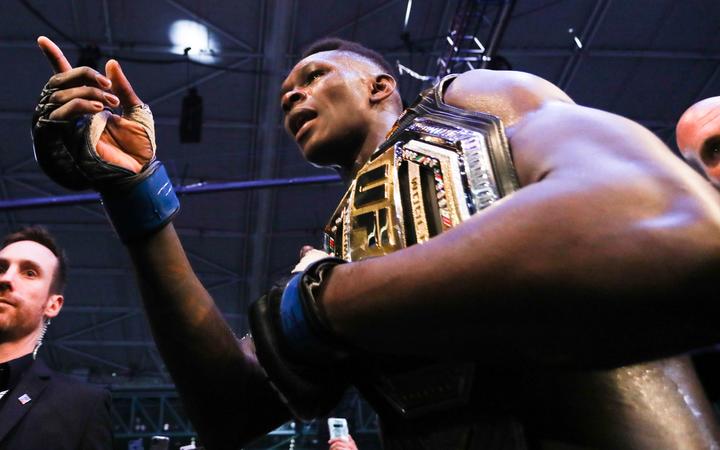 Israel Adesanya celebrates after defeating Robert Whittaker of Australia during the middleweight title bout of the UFC 243 fight night in Melbourne on October 6, 2019 Photo: AFP

With his distinctive and entertaining and explosive style and ability to spruik a fight, Adesanya has emerged as one of the big box office draws for the UFC.

At the post-fight press conference Lawrence Epstein, senior executive of UFC, said Adesanya can fill stadiums anywhere in the world.

"There's no doubt that this guy is gong to be a huge star, he's incredibly charismatic.

"He's got a fighting style that is really interesting and he's an incredible personality, so I think you're going to see him involved in a lot of big events in Vegas and Australia and who knows where else."

When asked where he would like to fight next Adesanya's first thought was New Zealand.

He said a fight back in Nigeria would be problematic.

"Oh definitely New Zealand ...for me the UFC Africa has to take some time it's not going to be next year it's going to take some time because even right now ...the leadership and the corruption where I'm from people would try, it would be too much. Where would I fight next? I don't know, probably Vegas or New Zealand," Adesanya said.

Adesanya's first defence could be against world No.2 ranked Paulo Costa of Brazil, who attended last night's fight.

"I told him in the octagon, I said 'I'll see you again definitely', Adesanya said.

While Whittaker said he would be up for a rematch, Adesanya's first defence is likely to be against No.2 ranked contender Paulo Costa of Brazil, who was at the fight.

Whittaker was adamant he could prevail in a rematch with Adesanya.

"I feel that I can beat him. I have the skill sets to beat him but we clashed heads and I came off second best and I got floored," Whittaker said.

Adesanya improved his MMA record to 18-0 and won the undisputed title in just his seventh UFC bout, all of them inside the past two years.