All Whites striker and Sydney FC recruit Kosta Barbarouses says the security of a long-term deal was the key to his off-season switch from A-League rivals Melbourne Victory.

Barbarouses joined Sydney after five seasons and two championships across two stints with the Victory.

"It was a big decision but, ultimately, Sydney showed a lot of faith in me and gave me a longer-term deal which was great for my family," said Barbarouses.

"We've just had a newborn child recently, so to have a bit of security for three years was a big factor in that.

"Obviously you want to join a team that has got a chance of being successful and, when I realised it was time to move on from Victory, I wanted to join another competitive side because that's what I'm used to; so it was an easy decision in terms of (joining) Sydney FC." 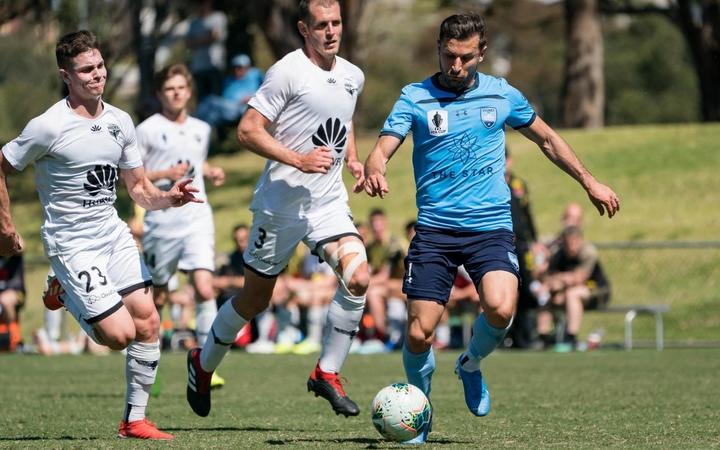 Sydney FC striker Kosta Barbarouses in pre-season action for the Sky Blues against one of his old clubs the Wellington Phoenix. Photo: Supplied: Sydney FC

Barbarouses's move incurred the wrath of some of his former team's fans on social media, with young Victory fans taking the opportunity to post snake emojis on his Instagram.

His Sydney FC teammates saw the lighter side of things, taking the opportunity to join in with snake comments of their own.

"It comes from I think some of the young people who use Instagram, one does it and then it's a bit of snowball effect and then obviously the boys have jumped on it too," Barbarouses said.

"So it's just become a bit of a running joke with the boys and the fans.

"But it's just making a joke out of a situation that probably a lot of people are actually upset about but the boys just did it to make me see the lighter side of it too."

Barbarouses said he hadn't known many of his fellow Sydney players before making the switch but had settled in well at his new club ahead of their season opener against Adelaide United.

"It's a new start for myself club-wise but I've fit in pretty well and the boys and the staff have been amazing to me, to help me fit in as soon as possible and we're just raring to go now," he said.