Hooker Julian Montoya scored a hat-trick in the first 26 minutes as Argentina got their World Cup campaign back on track with a 28-12 victory over Tonga on Saturday that snapped a 10-match losing streak. 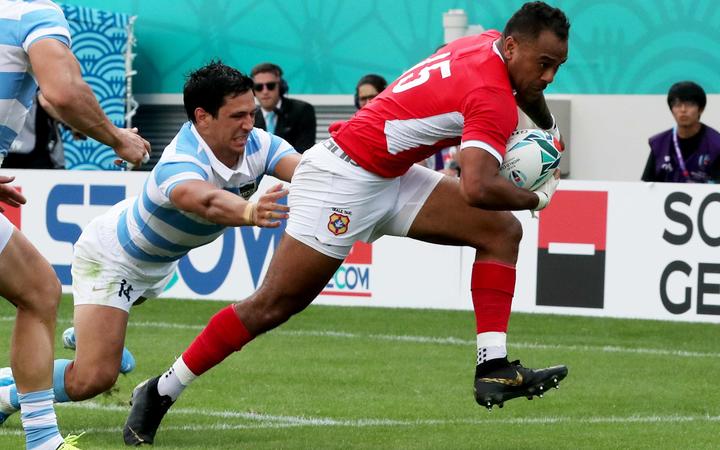 Argentina had failed to turn up in the first half of their opening loss to France last week but there was no repeat at the Hanazono Rugby Stadium with a fourth converted try from winger Santiago Carreras quickly wrapping up the bonus point.

That they failed to add to their score in the second half will be of some concern, however, as the twice World Cup semi-finalists head into their clash with pool leaders England in Tokyo next weekend.

Tonga, who lost their first match to England, got their first two tries of the tournament through fullback Telusa Veainu either side of halftime and put in a great defensive effort to keep the Pumas out in the second half.

"The bonus point is a big positive," said Pumas coach Mario Ledesma. "We were very good in the first half but not good in the second. Now we have to prepare ourselves for a big final against England next week."

"We wanted to start well but we gifted them some easy tries in the first half which made it difficult for us to come back," Piutau said.

Ledesma had made four changes from the defeat to France and three of them scored in the first half with Montoya and Carreras getting the tries and first five-eighth Benjamin Urdapilleta, making his first test start since 2013, adding the extras.

Knowing they had to beat Tonga to have any chance of pipping France to the group's second qualifying berth, Argentina signalled their intent early by opting to kick for touch when Veainu conceded a penalty in front of the posts.

Montoya threw in from the lineout and when the ball was pinged back to him from lock Guido Petti he had the simplest of tasks of taking it over the line to score in the seventh minute.

The hooker collected his second try in the 17th minute as he dived across the line off the back of a driving maul, and just minutes later it was 21-0, winger Carreras intercepting an ill-advised behind-the-back pass from James Faiva before racing half the field to score.

Montoya then got his third try in the 26th minute to became the second Argentine player to score a World Cup hat-trick after Martin Gaitan in 2003 against Namibia.

But out of the blue Tonga suddenly sprang to life and got back into the match just before the 30-minute mark, fullback Veainu fighting his way through a couple of flailing arm tackles to score their first try of the tournament.

A scrappy start to the second half saw Tonga relentlessly pinned back in their own 22 but they stunned Argentina with a second try in the 65th minute, Veainu diving over at the corner after a clever one-handed offload out the back from replacement wing Cooper Vuna.