Wales produced a tale of two halves as an electric start secured a deserved 43-14 bonus-point victory over Georgia in their Rugby World Cup Pool D clash, before they wilted in the energy-sapping humidity at the City of Toyota Stadium. 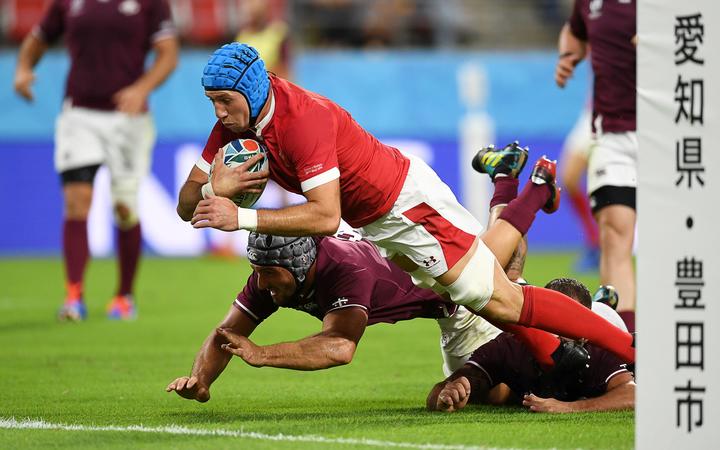 The Welsh were rampant as tries from Jonathan Davies, Justin Tipuric, Josh Adams and Liam Williams effectively ended the contest, handing them a 29-0 advantage at halftime with the bonus-point in the bag.

That endeavour and accuracy deserted them in a largely forgettable second 40 minutes, though, as scores from Tomos Williams and George North papered over gaping cracks in the Wales performance.

Georgia are hoping to use this World Cup as an audition for entry into the Six Nations, but there were few signs to suggest they are ready for that level apart from tries by props Shalva Mamukashvili and Levan Chilachava.

Both teams are back in action on Sunday as Wales meet Australia in Tokyo in the potential decider for top spot in the pool, while Georgia clash with Uruguay in Kumagaya.

"We ticked a lot of the boxes in the first half but we are probably a bit disappointed with the second half," Wales captain Alun Wyn Jones said.

"We allowed a couple of tries and we did not continue in a similar fashion (to the first half). It's a good result but there is plenty to work on.

"The overall feeling is that we took our foot off the gas a bit in the second half."

With the furore surrounding the return to Wales of attack coach Rob Howley for an alleged breach of betting rules, it was a far from ideal build-up to the tournament for Warren GatlandG��s side, but they showed no signs of a hangover.

A simple skip-pass allowed Davies to dot down under the posts, before a break from scrumhalf Gareth Davies was finished off by Tipuric.

Georgia's accuracy with their kicking out of hand was poor as they were pinned back in their own half. They were not quick enough in thought or action, and their ponderous possession was easy for their opponents to defend against.

The pressure told as Wales scored a third inside 20 minutes, a fine solo try from Adams after he was put through a big hole in the Georgian defence.

Wales had to wait until the end of the first half to secure their bonus-point try as they shifted the ball quickly out wide for Liam Williams to score.

The pre-game talk had been of the power of the Georgian forwards and the first sign of it came when they produced two excellent driving mauls and crossed the line through Mamukashvili.

Tomos Williams chased down a kick to score Wales' fifth try before Chilachava burrowed over after more powerful Georgian forward play. North finished the scoring when he stretched to dot down with four minutes remaining.