The Rugby World Cup opened with children singing while a brief history of rugby union was projected behind them onto the slopes of a replica of Mt Fuji erected in the middle of the pitch. 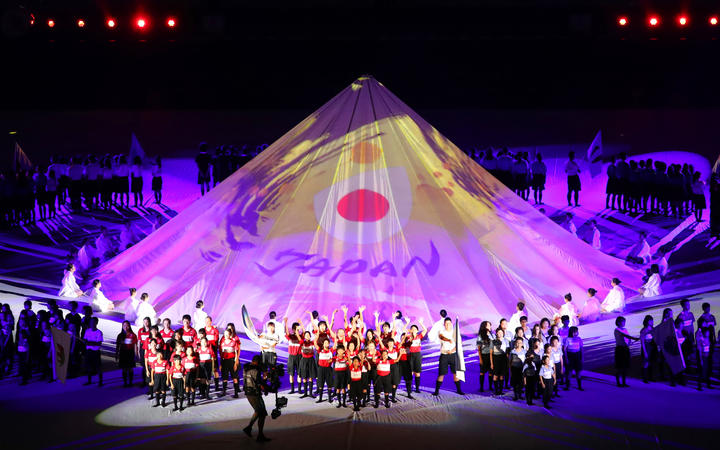 Performers take part in the opening ceremony of the Japan 2019 Rugby World Cup at the Tokyo Stadium. Photo: AFP

Around its base were the groups of schoolchildren represented each of the competing teams.

When the lights dimmed for the opening ceremony, the crowd let out a big cheer, and a continuous wave moved around the stadium.

As they announced the participating countries in the World Cup, Japan got the loudest applause. It was clear locals loved the All Blacks as cheers for New Zealand were second only to Japan.

Incredible scenes as Mount Fuji is beautifully depicted with all 20 team's emblems surrounding it. This is one special Rugby World Cup opening ceremony #RWC2019 pic.twitter.com/CDWHKwErLJ

Fans were later on the big projector screen as they danced along to YMCA.

Japan jerseys made up the majority of those in the crowd, but there were pockets of supporters from all around the world.

Performers in kimonos stand on the pitch of the Tokyo Stadium in Tokyo ahead of the Pool A opening match of the Japan 2019 Rugby World Cup. Photo: AFP

Prince Akishino made the declaration after performances inspired by Japanese festivals with a high-tech Kabuki dance performance.

Former All Black captain Richie McCaw was part of the opening, too, delivering the William Webb Ellis Cup to the tournament under a spotlight. 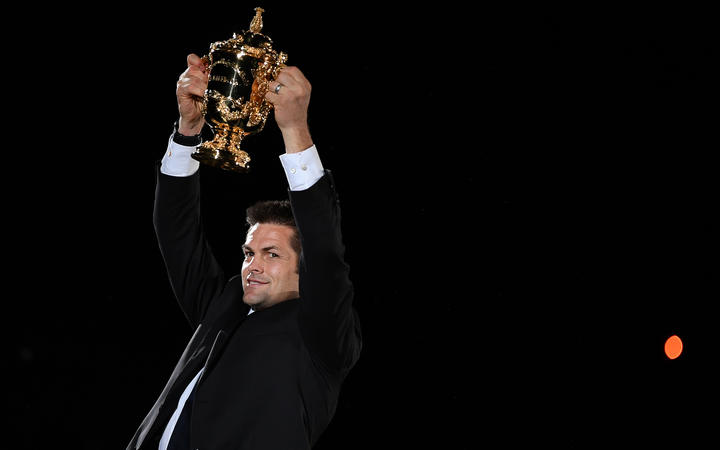 World rugby chairman Sir Bill Beaumont said in a speech during the ceremony: "This is ... the moment that the organising committee, the host cities and so many Japanese people have been working for with great dedication and passion. You can all be very proud tonight. You have made history.

"Over the next six weeks we will experience the very best of rugby, and the very best of Japan. Unforgettable moments will be shared on and off the field as excitement sweeps this great nation...

"The waiting is over. The stage is set. It is now over to the teams, the fans, and the people of Japan to make this the best Rugby World Cup ever."

The tournament runs through to 2 November and kicks off with a pool A match between hosts Japan and Russia.

Fans getting into the spirit

Fans began arriving at the stadium from midday, the vast majority of them in Brave Blossoms kit. It was a family outing for many, with parents and their young children soaking in the atmosphere, waving flags and taking photos together. 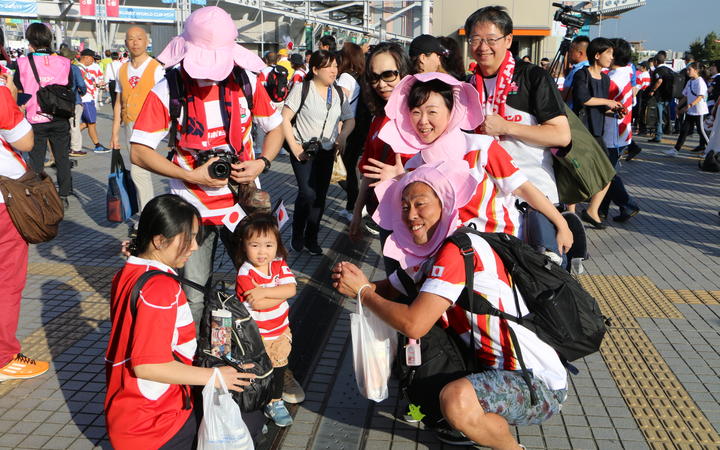 They were proudly supporting Japan, but would yell out "All Blacks!" whenever they recognised anyone from the crowd as being from New Zealand.

Meanwhile, New Zealand fans were enjoying the novelty of being able to drink alcohol on the streets.

It was the first thing many of them mentioned, as they held cans of beer or Chu-hi in their hands.

John Puna and Brian Hore were a couple of blokes enjoying a beer on the side of the street just outside the stadium.

John Puna described his excitement, saying he'd been counting down to this moment for the past 12 months.

He wanted an All Blacks three-peat, and both hoped Japan would pull off the win tonight and make it through to at least the quarter finals. 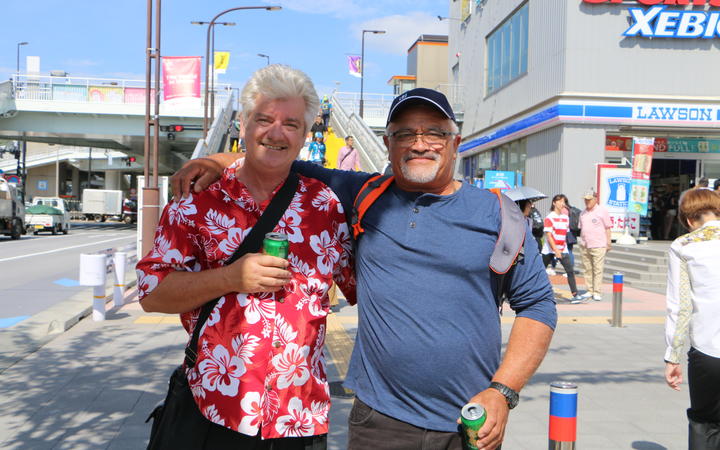 "I'm over the moon, so happy to be here, lucky and privileged to be here," Mr Hore said.

"It's a winner place, Japan. And the beer is bubbly."

Everyone spoken to raved about the Japanese hospitality and how helpful and friendly locals have been.

"I've already had half a dozen high-fives from Japanese supporters" said Robin Houghton - who wore a Brave Blossoms jersey - though from tomorrow onwards it will be all about the Silver Fern and the black jersey.

He was in Japan thanks to a birthday present from his wife Glenice.

It's their first World Cup together.

"It's just starting to kick in, now that we see all these colours around here, it really feels like it's happening."