Latest - The discarded All Blacks prop Owen Franks will play his first game for Canterbury in nine years, when he turns out against Northland in Whangarei tomorrow night in the national domestic competition. 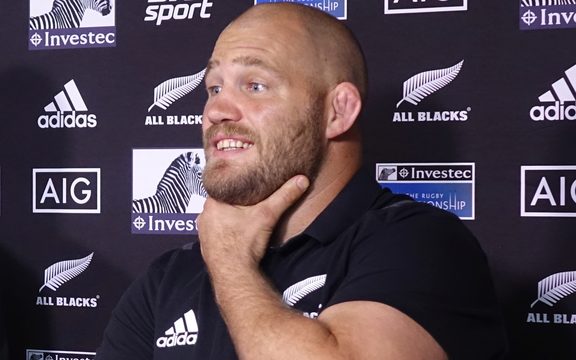 Franks missed out on selection for the All Blacks world cup squad and the last of his 108 eight tests in the lost to Australia in Perth last month.

The 31 year old Franks last played provincial rugby for Canterbury in 2010 and will head to England later this year having signed a three year deal with Northampton.

The seven time Formula One world champion Michael Schumacher is conscious after undergoing stem-cell treatment in Paris according to French newspaper Le Parisien. 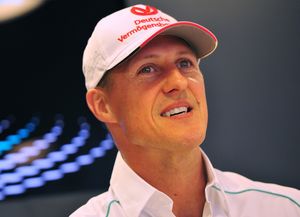 The newspaper quotes an unamed nurse at the the Georges-Pompidou hospital where he was admitted on Monday, who says Schumacher is showing signs of recovery and is "conscious."

Little has been seen or revealed of Schumacher, since a skiing accident in the French Alps six years ago that reportedly left him with brain damage.

The treatment of the former driving ace, whose precise physical and mental state is unknown, is shrouded in secrecy.

Schumacher's entourage have issued no comment on the report and the hospital has made no statement about his presence or health.

Le Parisien reported Schumach he was being treated by cardiovascular surgeon Philippe Menasché, who was described as a "pioneer in cell surgery".

England finally run out of patience with Roy

England has dropped batsman Jason Roy for the fifth and final test against Australia starting at The Oval tonight as they try to level the series after failing to claim the Ashes. 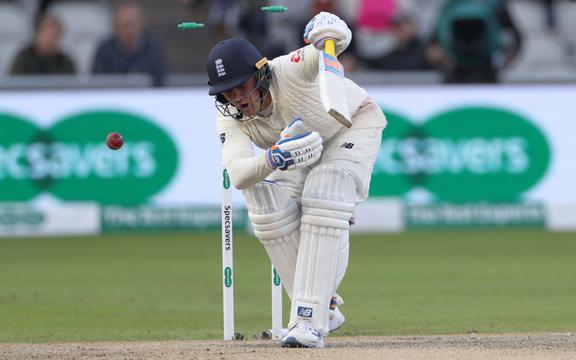 The out-of-form Roy is one of two changes to the side that lost the fourth test at Old Trafford on Sunday by 185 runs, with bowler Craig Overton also missing out.

They are replaced by all rounder Sam Curran and Chris Woakes. Ben Stokes will play as a batsman only after injuring his shoulder at Old Trafford.

Australia, who retained the Ashes by taking a 2-1 series lead in Manchester, make one change with all-rounder Mitchell Marsh coming in to bolster the bowling attack. He replaces Travis Head.

Roy's omission is no great surprise as he has struggled throughout the series having made his test debut in the warm-up match against Ireland.

The one-day specialist was the latest attempt to solve England's opening woes but the gamble has not paid off and he has managed only 110 runs in eight innings with a top score of 31 at Old Trafford when he dropped down the order. 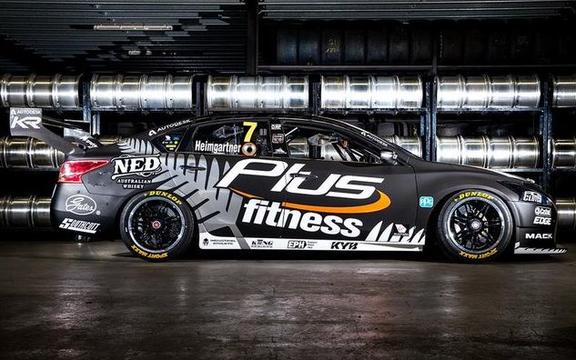 The livery for Andre Heimgartner's car for the Auckland Supersprint. Photo: Twitter

Kelly Racing has unveiled a black and white scheme, complete with large silver fern, for the 24-year-old's home event.

Heimgartner is one of five Kiwis in the field, joining Scott McLaughlin, Fabian Coulthard, Shane van Gisbergen and Richie Stanaway.

It won't be the first time Heimgartner has raced in national colours, having also sported all-black paintwork at Super Black Racing in 2014 and '15.

"I'm extremely proud of what the team has produced, this has to be the best-looking race car I've had," said Heimgartner.

Tevita Kuridrani is on track to be fit for Australia's Rugby World Cup opener against Fiji but fellow centre Jordan Petaia may not be available until their third group match against Uruguay. 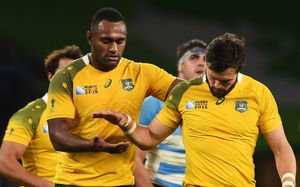 Both players are battling hamstring strains but Petaia's injury needed a longer recovery and could see the uncapped teenager ruled out of the second match against Pool D rivals Wales, Wallabies coach Michael Cheika said at training in Odawara, Japan.

"I think Tevita is running nearly back at full pace so I'm hopeful he's going to be right for selection next weekend," Cheika told local reporters.

"Our target for Jordan is a couple of weeks later. If not Wales, the one after but we're hopeful it will be for Wales."

They play their last group match against Georgia on Oct. 11.

Patty Mills has blazed Australia into their first Basketball World Cup semi-final, starring again as the Boomers beat the Czech Republic 82-70 in China. 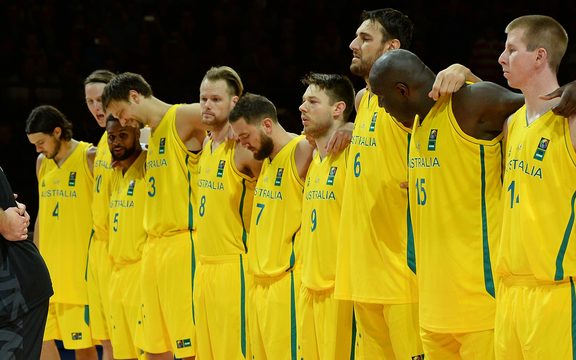 The shooting guard finished with 24 points and six rebounds, 13 points coming in the first quarter in Shanghai where both teams struggled early but Australia flourished late.

Andrew Bogut (10 points on five-of-six shooting) played his best game of the tournament, turning the game in Australia's favour in a decisive third term.

It means a rematch with Spain in Bejing on Friday for a spot in Sunday's final, the Spanish having denied the Boomers a bronze medal with a one-point win at Rio's Olympics.

Awaiting the winner in the decider will be one of France and Argentina, after both teams managed huge quarter-final upsets to oust the United States and Serbia respectively.

It marks the first time in a World Cup that neither the US or Serbia - or formerly Yugoslavia - haven't featured in the final four.

Australian driver David Reynolds has agreed to a landmark deal with his Supercars team ahead of this weekend's Auckland Supersprint. Reynolds has signed a 10-year contract with Penrite Racing, securing his future in the championship through to the end of 2029.

It's the longest contract in the sport's history and will ensure the 2017 Bathurst winner remains at the team until he's 44 - five years older than the oldest driver in the current field.

"You do long-term deals with long-term people and I'm here for the long haul; I am going to stay for as long as I can," Reynolds said.

"I never thought about leaving, it was just figuring out what we were signing, and I have found the best home for me.

"We have gone from strength to strength and grown to be one of the best teams in pit lane, so we're going to continue to do that and move forward."

Sri Lanka warned of a possible terrorist threat in Pakistan

The Sri Lankan cricket association is reassessing the security situation in Pakistan after receiving a warning of "a possible terrorist threat" to its team. 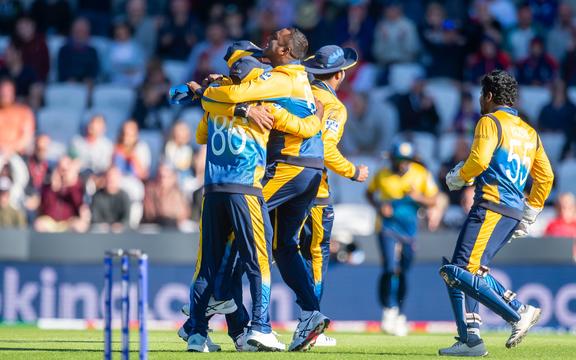 Sri Lanka are scheduled to play three one-day internationals and three Twenty20 international matches in Pakistan between September 27 and October 9, and 10 key Sri Lankan players have already opted out of the series, citing security concerns.

The association, which has named weakened ODI and T20 squads for the tour, said in a statement it had received the warning from the prime minister's office.

"Sri Lanka Cricket today sought the assistance of the Sri Lankan Government to conduct a 'Reassessment' of the security situation in Pakistan ahead of the National Team's planned tour to Pakistan," SLC said.

"The warning highlights that the Prime Minister's Office has received reliable information of a possible terrorist threat on the Sri Lankan team while touring Pakistan.

"Hence, SLC has been advised to take extreme care, and 'reassess' the situation, before embarking on the said tour."

Briana Williams has been named in Jamaica's team for the upcoming World Athletics Championships in Doha despite facing a hearing into a positive doping test.

The inclusion of the world under-20 double sprint champion in Jamaica's 55-member squad is contingent on the outcome of her disciplinary hearing, which is set for Sept. 23-25 in Kingston.

"We have entered Briana Williams in the 100m and the 4x100 relay, subject of course to clearance," Lincoln Eatmon, the second vice president of the Jamaica Athletics Administrative Association (JAAA) said.

Double Olympic champion Elaine Thompson and three-time 100m world champion Shelly-Ann Fraser-Pryce, who are both set to contest the 100m, 200m and sprint relay, headline Jamaica's team for the global championships, which get underway on Sept. 27.

Colombian back in contention at the Vuelta

Philippe Gilbert has claimed a second stage victory at the Spanish Vuelta, as Nairo Quintana rode himself back into overall contention with a fine performance in the breakaway on stage 17.

The Colombian now sits 2:24 back, with two of his favoured mountain stages still to come as the race nears its conclusion.

Valverde is 2:48 behind, while fourth-placed Tadej Pogacar looks to be out of contention for a podium spot at 3:42 behind Roglic.

"We knew how to move, and hopefully I'll get better physically," Quintana said after teammate Nelson Oliveira conceded his breakaway effort had not been planned for by Movistar.

"We were able to profit on a day when anything could've happened. I'm feeling a bit better having been suffering with a cold, but we'll see how I do in the mountains tomorrow."

Rory McIlroy has added another award to his trophy cabinet as he was named the PGA Tour Player of the Year for a third time following a 2018-19 campaign capped by his FedExCup championship triumph. 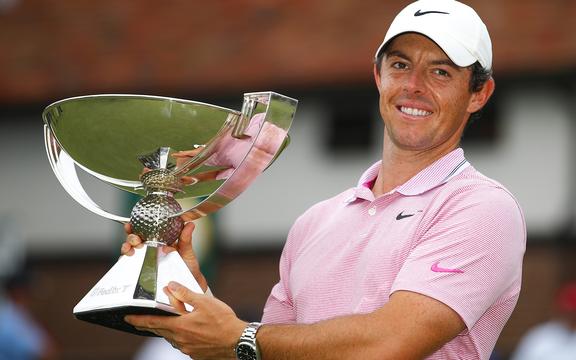 The 30-year-old Northern Irishman beat out Brooks Koepka, Matt Kuchar and Xander Schauffele in a vote by players for the Jack Nicklaus Award.

McIlroy, who won the award in 2012 and 2014, made 17 of 19 cuts while racking up three victories, including at the season-ending Tour Championship where he also claimed the FedExCup.

The four-times major champion's other victories came at The Players Championship and RBC Canadian Open, where he set a tournament record and won by seven shots - the largest winning margin of the season.

Koepka, who two weeks ago was named PGA of America Player of the Year, was considered the frontrunner for the award after finishing in the top five at all four majors, including at the PGA Championship where he picked up his fourth major title.