Canberra's Hudson Young has been banned for eight games, with the NRL judiciary dismissing victim Adam Pompey's evidence and finding the Raider guilty of dangerous contact with the eyes.

The panel rejected Young's claims he'd not made any contact with Warriors centre Adam Pompey's eyes.

They went against evidence from Pompey, who had appeared via video link to defend Young.

In arguably the most-important moment of the case, Pompey claimed he did not feel any contact with any of his face, but then agreed he believed what happened on the field should stay on the field. 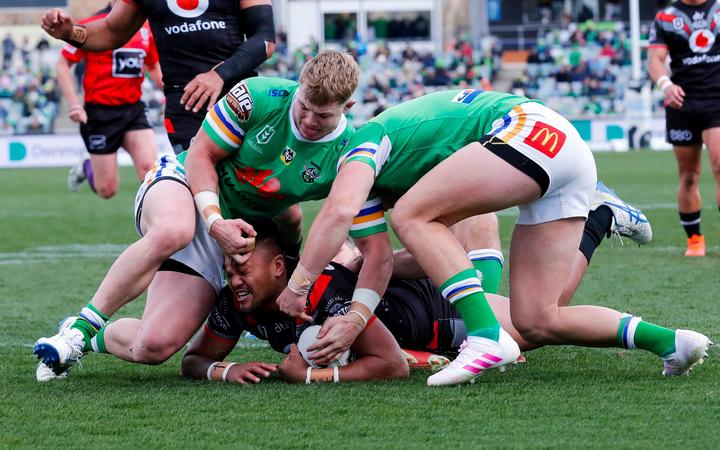 It prompted judiciary chair Geoff Bellew to later tell his three-man panel to consider if Pompey's evidence was "influenced by a sense of loyalty to another professional footballer".

The visibly upset Raiders' youngster had to sit through a further hearing to determine his suspension, with the NRL pushing for up to 12 games amid claims it was intentional.

In contrast, Young's lawyer Nick Ghabar argued the ban should be five or six weeks, given his view it was only careless.

"Although I'm disappointed with their decision, I'll accept my punishment and learn from it," Young said afterwards.

"I'd like to thank Adam and Nick for speaking on my behalf tonight. It's much appreciated."

The blow comes on the eve of Canberra's finals campaign, with his ban to begin from Saturday's clash with Melbourne and extend into next season.

In his defence, Young had claimed he was merely trying to hold Pompey up when he dug his hand down for a second time, and that it slipped off the Warriors' hand.

He claimed he felt his hand on Pompey's face, prompting him to quickly pull it away without making contact with his left eye.

"I just felt his face," Pompey told the panel, adding his head was down and he was not looking as he braced for possible contact.

"I didn't know if it was his cheek. But it definitely wasn't his eyes.

"I'd know if I got someone in the eye because it's soft and a completely different feel."

"You said you were trying to grab anything to stop him scoring a try. And that included his face," Peter McGrath said.

"You didn't pull away as soon as you felt contact. You have a grip on Pompey's eye socket.

"And you had a finger in his eye socket. It was after that you pulled that right hand away in a raking motion."

The ban is Young's second this season for dangerous contact with a player's eye.

He was also suspended for a similar incident in round 12 involving Canterbury prop Aiden Tolman.