New Zealand swimmer Sophie Pascoe says there's a real edge at the World Para Swimming Championships in London, with athletes out to prove a point before next year's Tokyo Paralympics. 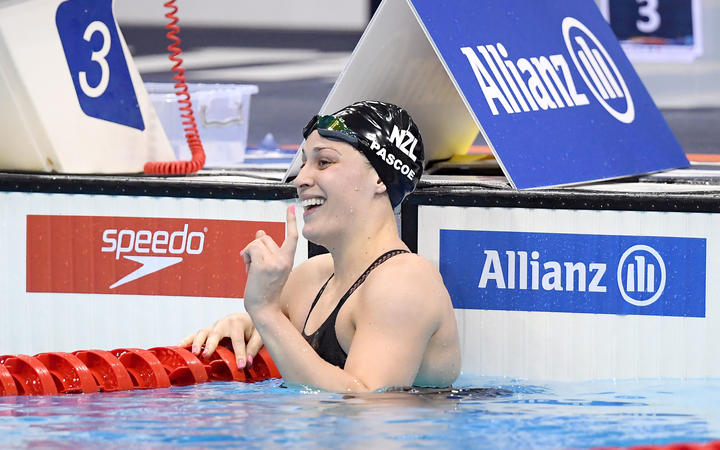 Pascoe picked up Gold this morning in her opening event by dominating the women's 100 metre freestyle S9 final after going over two and a half seconds ahead of her nearest rival.

Pascoe, who holds the World Record time of 59.78 seconds, touched the wall at 1.02 minutes.

"The plan was to go out strong and then come back stronger and that's exactly what I did," Pascoe said.

"I set the expectation pretty high going in. I would have liked to have subbed a minute but didn't quite get there but obviously came away with the gold medal, gave it everything so can't ask for much more."

It's the first time Pascoe has been back at the venue since winning three gold medals in the 2012 London Paralympics and said it was nice competing at a place where she had happy memories.

"This is one of my favourite pools that I've ever swum in around the world so to be back here, to have good memories of the atmosphere. It's a great pool, it's a fast pool and to be back in it and kickstarting the meet off with a gold medal and back winning a gold medal in the 100 free [freestyle] where I did that seven years ago is awesome."

The win marks Pascoe's ninth world title. She will try to do the same in the 100m backstroke tomorrow, followed by one of her key events, the 100m butterfly, then finishing off with the 50m freestyle.

The Championships are the biggest gathering of Para-swimmers since the Rio Paralympics, with a top-two slot in each race securing a spot for countries in Tokyo.

It also marks the return of Russia to the big time after they were banned from Paralympic competition in 2016, missing the Rio Games.

The World Championships will be the most high-profile event with Russian participation since the lifting of their ban earlier this year.

Pascoe said there was a real edge in London with the best of the best going head to head.

"This is our qualifying to get spots for the nation and the best of the best are here to get those spots. So it's a really high expectation of a meet going forward into Tokyo. This is where everyone needs to show and prove a point going into Tokyo and we all know that there's going to be more to give in another year's time. So the feels around here is that we're all here to get the slots for our nation but that we also have more in the tank in another year's time."

Pascoe said it was the closest they would get to a Paralympic atmosphere.

"It kind of makes you go 'wow' a year's going to come around a lot quicker than we think. The World Champs come around pretty quickly as well so it's exiting times for everybody at the moment."

Ahead of the World Champs Pascoe and her coach Roly Crichton identified the need to change some things, so she's doing cross training outside of the pool.

She said doing things like rock climbing, boxing and yoga had helped her stay fresh after 15 year's of competing at an international level.

"I'm going into my fourth campaign now, 26 year's of age and been doing this ...so the body physically but also the mind mentally needs to change things up and that's why we have been changing up the programme Roly and I so I've had great fun enjoying new types of training but also reaping the benefits of that.

"My times haven't defaulted in the pool from doing different types of training so I can't ask for much more than that other than give it 100 percent every single day and every session that I do so it's been a great change and we'll be continuing those changes through to Tokyo."

Her win ensures a New Zealand spot in the 100 metre freestyle at the Tokyo Paralympics.