Canadian teenager Bianca Andreescu battled past a tenacious Taylor Townsend 6-1 4-6 6-2 in a late night thriller at the US Open to reach her first grand slam quarter-final and end the American's fairytale run at Flushing Meadows. 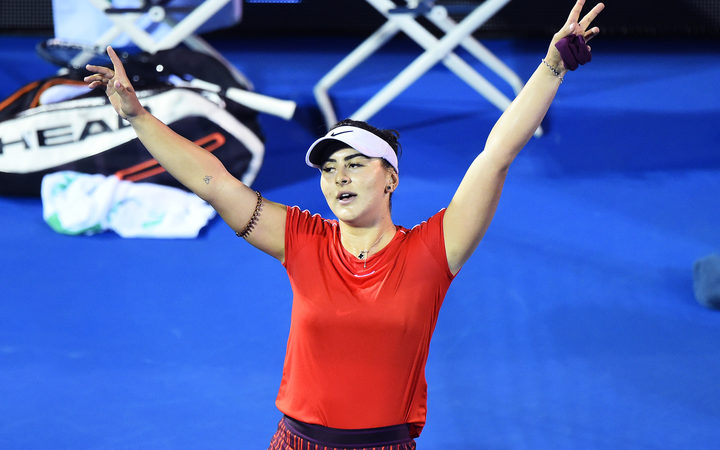 Bianca Andreescu after her win over Venus Williams during the ASB Classic Quarter Finals in Auckland. Photo: Photosport

Ranked 116th in the world and having clawed her way into the US Open main draw via qualifying, Townsend was the clear underdog against the 15th seeded Andreescu, who arrived at the year's final grand slam hyped as the next big thing in women's tennis.

Andreescu turned heads when she came runner up at Auckland's ASB Classic in January this year.

"I have been working and dreaming of this for a long time," said Andreescu. "So it feels pretty dam good to be in the quarters.

"Every tournament I am in I expect to win but I know I have a lot of tough opponents before reaching the finals."

But Townsend, who had already knocked off Wimbledon champion Simona Halep in the second round, would not be intimidated even after being blown out in the opening set. The match was billed as a clash of styles with Townsend employing the serve-and-volley game that baffled the fourth seeded Halep going against the hard-hitting Canadian.

"She has a different game from many other people," said Andreescu. "It wasn't easy that's for sure.

"I don't normally play people like this but I made sure to work on my passing shots yesterday and I think it worked in the first and third sets.

But Andreescu has shown in winning hardcourt titles in Indian Wells and Toronto that she is much more than a big serve and ferocious forehand.

The teenager comes armed with an improving all court game and has shown a willingness and ability to come to net.

There were, however, a few glaring cracks in Andreescu's game, particularly her serve as she committed eight double faults, many at critical moments.

As Townsend fought back a shaken Andreescu took a washroom break, while the American skipped rope on court to keep loose to the amusement of the Arthur Ashe Stadium crowd.

The support could not save Townsend as Andreescu opened the third set with a break and charged in front 5-1.

Townsend refused to go away quietly fighting off four match points to extend the contest before Andreescu served out the match.

Never before past the second round of any grand slam Andreescu has confidently navigated her way into the last eight where she will face Belgian 25th seed Elise Mertens, who blasted her way into the quarter-finals with a 6-1 6-1 demolition of another American surprise package wildcard Kristie Ahn.

Rafa Nadal faced his stiffest challenge yet at the US Open but raised his game to beat Marin Cilic 6-3 3-6 6-1 6-2 to continue his quest for a fourth Flushing Meadows title.

The second-seeded Spaniard was in cruise control as he took the first set behind some superb serving and stout defence but the big-hitting Croatian battled back to snatch the second.

That was as good as it would get for Cilic, however, the momentum shifting decisively in Nadal's favour when he jumped in the air to hit a spectacular overhead smash that electrified the crowd.

Nadal fired a forehand winner on match point to seal the victory and make his 40th quarter-final at a Grand Slam event.

Next up for the 18-time Grand Slam champion is a meeting with Argentine Diego Schwartzman, who toppled Alexander Zverev in their round of 16 clash earlier in the day.

Nadal is on a collision course with third seed Roger Federer and could meet his old rival in Sunday's final if both players advance. Federer faces Grigor Dimitrov in the quarters.