South Africa captain Siya Kolisi won his fitness battle to lead his country at the Rugby World Cup in Japan, as coach Rassie Erasmus named the back-row forward in his 31-man squad. 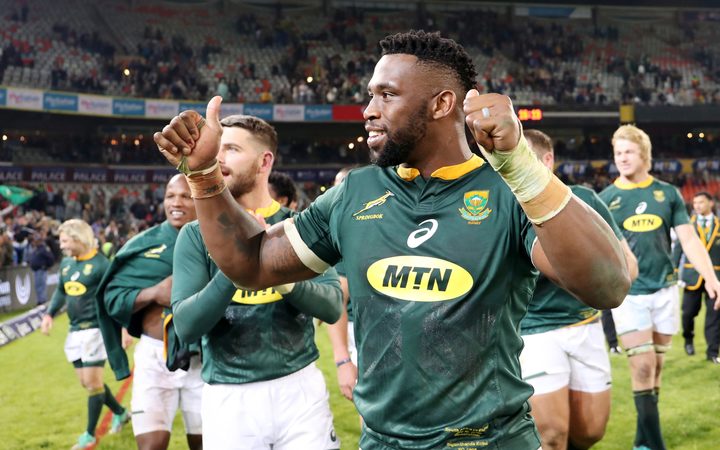 Kolisi had been a doubt since injuring his knee in May, missing the Springboks' triumphant Rugby Championship campaign. However, he returned to play 53 minutes in their last test, a 24-18 win over Argentina in Pretoria on Aug. 17.

The Boks are among a small handful of teams with a realistic chance of being crowned world champions on Nov 2 and Kolisi, their first ever black test captain, is seen as an important figure on and off the pitch.

His presence is a major boost to Erasmus, who provided no big surprises in his selection.

"I'm nervous, but also excited because I know who is in my corner," Kolisi said as the squad was unveiled on Monday. "I have guys with a lot of leadership skills. We have been working hard the last two years to make sure we gain some respect back, but our work is not done yet."

Erasmus said he was very happy with the composition of the squad, highlighting its "a good balance of established experience and some exciting youth.

Giant lock Eben Etzebeth made the cut despite an incident outside a bar over the weekend that forced South African Rugby to issue a statement in his support. He has denied any wrongdoing.

He is one of four second-rowers along with Lood de Jager, Franco Mostert and RG Snyman.

Pieter-Steph du Toit can also provide cover at lock but has been selected at loose forward, where the more mobile Kwagga Smith got the nod ahead of Rynhardt Elstadt.

There is vast experience at number eight with Francois Louw and Duane Vermeulen. 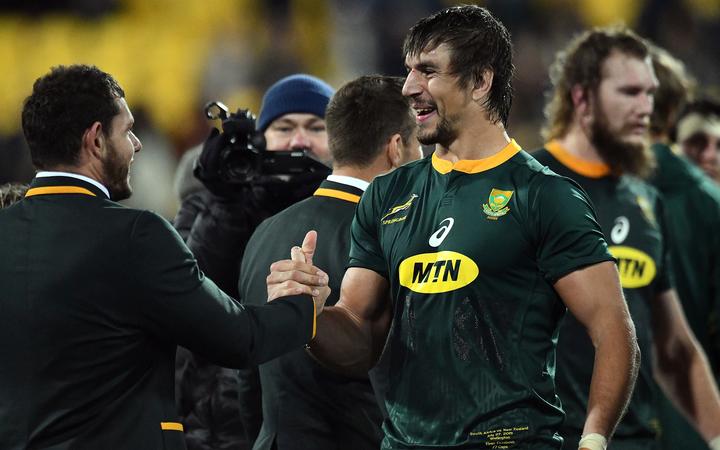 The Springboks celebrate their draw against the All Blacks. Photo: Photosport

Handre Pollard will orchestrate the backline from flyhalf, one of two out-and-out number 10s along with Elton Jantjies.

The versatile Frans Steyn can also cover that position, and at fullback, but has been selected as an inside centre.

"I am confident that any of this 31 can step into a play-off match at the Rugby World Cup and deliver an outstanding performance," Erasmus said.

As expected Aphiwe Dyantyi, pleading innocent after testing positive for an unspecified banned substance, was not selected.

The Boks will play a final warm-up match against Japan on Sept. 6 in Kumagaya, before their World Cup opener against defending champions and bookmakers' favourites New Zealand in Yokohama on Sept. 21.

The two-time World Cup winners will also play Italy, Namibia and Canada in Pool B.