Tall Blacks coach Paul Henare has finalised his 12 for the men's basketball World Cup following their series against Canada. 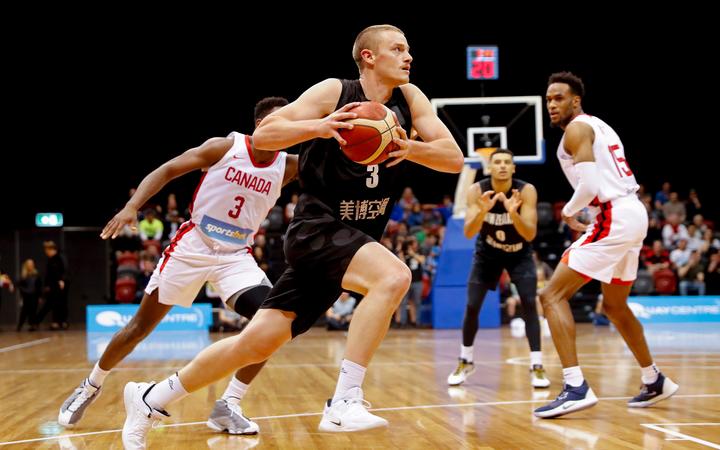 Tom Vodanovich and teenager Taine Murray have been dropped from the 14.

After a 34 point hiding in the first game in Sydney the Tall Blacks took the Canadians to overtime before losing 103-100.

From the opening buzzer the Tall Blacks showed they had learned their lessons from the night before, extending to a 23-13 opening quarter lead through some solid defence.

Canada led by one at the half and it remained close for the rest of the game.

The Tall Blacks were without Shea Ili again while Alex Pledger and Jarrod Kenny were on limited minutes through illness.

Coach Paul Henare was pleased with the return to a more typical Tall Blacks effort, based on energy, work rate and an up-tempo offence.

Immediately after the game, Henare confirmed his final 12 for China, with the team due to fly out today to play their final three warm up games, with 17-year-old Taine Murray and Tom Vodanovich missing out and heading home from Sydney.

Henare says both have contributed well during their time with the team but will have to bide their time for a first World Cup appearance.

"These are always the most difficult decisions and all the more so when leading into a tournament such as a World Cup. Tom and Taine have both shown they are going to return to this environment, and I hope will take a huge amount from their time in camp and on tour.

Henare is excited at the group of 12 selected though, and proud of what they and others have achieved to get to this day.

"The group we have decided on is a well-balanced one in respect of their experience and their on-court roles and responsibilities. Most important is their understanding of and ability to play the game we are looking to play as a team in China and we will continue to use the remainder of our build up to fine tune and look to be at our best on September 1st when we run out against Brazil.

"We have had to deal with a couple of injuries and sickness prior to our initial selection and then here in Sydney, that has given other guys a chance to step up and play more minutes. We head to China with an experienced group, but a group that knows they have a lot of hard work ahead, but they are ready to embrace this challenge."