The Warriors survived a late comeback from the Manly Sea Eagles to pick up a 24-16 win in Auckland and keep themselves in the hunt for the NRL playoffs.

The Warriors led 18-0 with 15 minutes to play and looked set for a comfortable victory, before the sin binning of Adam Blair sparked a hectic finish with Sea Eagles scoring 16 points in eight minutes and come within a whisker of a win. 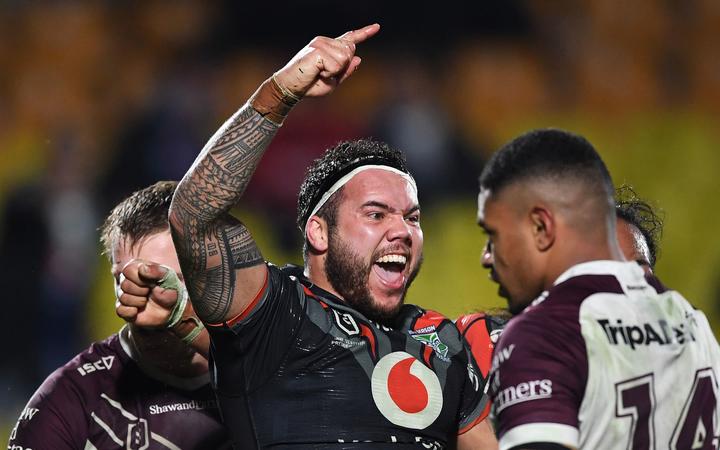 Blair was sent to the bin after obstructing Manase Fainu on a potential try-scoring play with 13 minutes to go, and Manly used their numerical advantage to score once through Joel Thompson and twice more through winger Reuben Garrick.

But a Jazz Tevaga try with three minutes to go sealed victory and ended a run of six losses at home.

It was also an impressive turnaround from the Warriors after their 46-12 hiding from the Raiders the week before.

The Warriors scored three first-half tries and kicked a penalty to lead 18-0 at the break, and held that advantage until Blair was sent to the sin bin with 14 to play.

Kearney said the side's enthusiasm on the opening set laid the platform for the victory and kept their slim play-off hopes alive.

"It's a good start, sometimes that doesn't always translate into the victory, but it sets a tone for the group and sends the opposition a message too," Kearney said of the opening exchanges.

"I thought it was our defence [that was the difference in the first half].

"They ended up having 55 percent possession of the footy, so they had a fair bit of possession on us down on our try line and we managed to keep them out.

"That was a bit of desperation, we probably frustrated them into some errors there and we put ourselves in the picture.

"There was a couple of times there where we looked short ,and they're the type of team that don't need a great deal to get over the try line ... and we found a way to stop it."

Manly stay fifth on the table, while the Warriors are 11th, two points outside the top eight.