The Wallabies have stunned the All Blacks and set themselves up to bring home the Bledisloe Cup with an inspired 47-26 Test win in Perth. 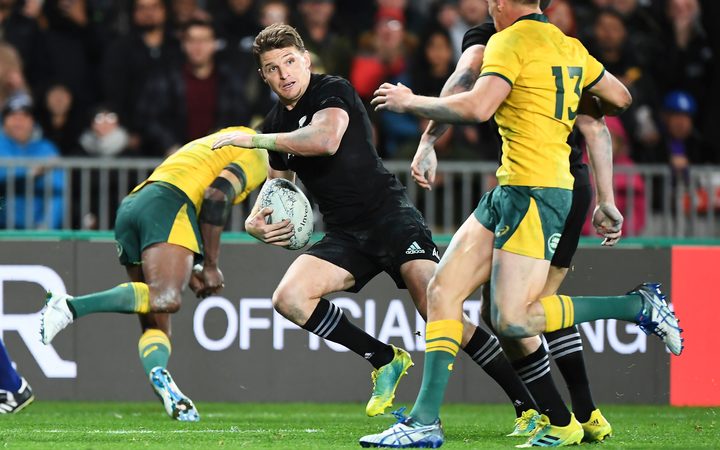 The Australians were given little chance of knocking off their arch-rivals, but delivered their best performance in years to make a statement with the World Cup starting next month.

They must crack their first win in Auckland since 1986 to secure the prized trans-Tasman trophy for the first time in 17 years.

In an extra sweetener, the All Blacks might surrender their world No.1 ranking to Wales for the first time since 2009 should the Welsh beat England later this weekend.

Wallabies skipper Michael Hooper with his elbow and shoulder.

While it was a tough call, Australia already had their tails up with a dominant first half and took a 16-12 lead into the break.

It was difficult to pick the Wallabies' best with Hooper everywhere, halfback Nic White a handful and the entire forward pack deserving a pat on the back.

James O'Connor, starting his first match in six years, also booked his ticket to Japan as he set up a try and gave the attack plenty of options.

The Wallabies extended the margin to 26-12 early in the second half with giant flanker Lukhan Salakaia-Loto scoring before Samu Kerevi set up the second.

The bustling centre ran over the top of star All Blacks fullback Beauden Barrett before offloading to White.

Barrett exacted some revenge six minutes later when he darted through some flimsy Wallabies defence, with the conversion closing the gap to seven points.

But that was as close as the undermanned Kiwis could get as the scoreboard ticked over for Australia.

Reece Hodge scored his second try while fellow winger Marika Koroibete, who was equally as dangerous all night, also crossed.

Fullback Kurtley Beale iced the win with their sixth try in the 80th minute to allow the celebrations to begin.