Sir Brian Lochore may have coached the All Blacks to the first World Cup, but in the Wairarapa, he'll always be known as the 'miracle man' for his efforts with the local team. 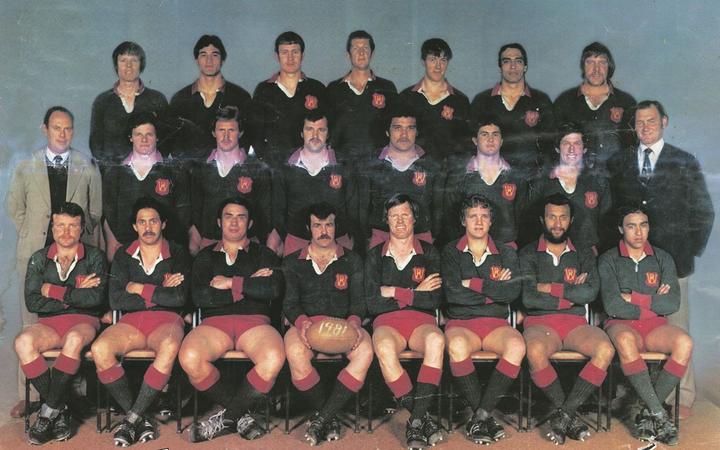 You might think that taking the All Blacks to their inaugural World Cup win in 1987 simply had to be the pinnacle of Sir Brian Lochore's rugby coaching career.

After all, it was the very first time the top rugby nations from around the planet had come together to play for the Webb Ellis Cup and to make the occasion even more exciting the grand final was played against France on home territory, at Eden Park in Auckland in front of thousands and thousands of adoring fans. And, of course, many more thousands watching courtesy of the live television coverage.

Giddy stuff indeed, but ask Sir Brian himself and he was always quick to rank another of his coaching achievements as at least being on a par with that memorable success.

Hardened Wairarapa-Bush rugby enthusiasts won't need reminding of those heady days in 1981 when under Sir Brian's tutelage their team went on a never-to-be-repeated winning streak which saw them promoted to the NPC First Division competition, a story of true fairytale proportions. And one which, quite rightly had Sir Brian dubbed the "Miracle Man".

If ever you wanted an example of his ability to turn a group of mainly good average players into something more this had to be it.

In his authorised biography, simply entitled Lochore, Sir Brian said the thrill of Wairarapa-Bush beating Southland at Invercargill's Rugby Park in the promotion-relegation match for First Division status had been matched in his coaching career only by that All Blacks win in the inaugural World Cup.

"Quite honestly the two of them would be on a par. I know people from the bigger centres might struggle to understand that but for Wairarapa-Bush to get to First Division…… well, considering our lack of population and consequently our lack of playing numbers it was a staggering achievement. Not so much for me personally but for the players, the officials, the supporters…everyone. It was the sort of feeling we'd never experienced before, and everybody was just so rapt about it.".

It was just one season earlier that Sir Brian took over the Wairarapa-Bush coaching reins and he could never be accused of moving into a position of promise as Wairarapa-Bush's record in 1979 was woeful, the only positives from an 11-match programme being one win and one draw.

For Sir Brian that first year in charge was all about building confidence and having the players actually enjoy their rugby. And there were rules to help this happen, like a dress code which meant that players used to turning up for games in open-necked shirts and jeans started wearing ties with their shirts and a decent pair of trousers.

Results-wise that 1980 season went well. Six wins and a draw from 11 games and a third placing in what was then known as the North Island Second Division competition.

Sir Brian was justifiably delighted with the progress made. "We had become a team in the true sense of the word and that's important, especially in smaller unions where the odds are often stacked against you. Everybody has to gel together in that environment."

There was never any question of course that Sir Brian would be returned to the coaching job in 1981 and mindful of the fact that size was always going to be a problem amongst the forwards and that speed around the paddock would be an absolute necessity if they were to be competitive, Sir Brian encouraged his players to religiously follow fitness programmes over the summer months. He was thrilled by their response.

"I said to the guys that if they weren't going to be the biggest team about they had to be the fittest. That was something which was in their own hands and to their credit they really worked at it. We didn't meet many teams who matched us in that regard".

The players themselves thrived on the Lochore coaching philosophy with skipper Gary McGlashan later saying that with BJ you knew you had the confidence of the coach, that it wasn't a matter of one poor game and you were out.

"There was always a second chance and the players appreciated the feeling of security that gave them." 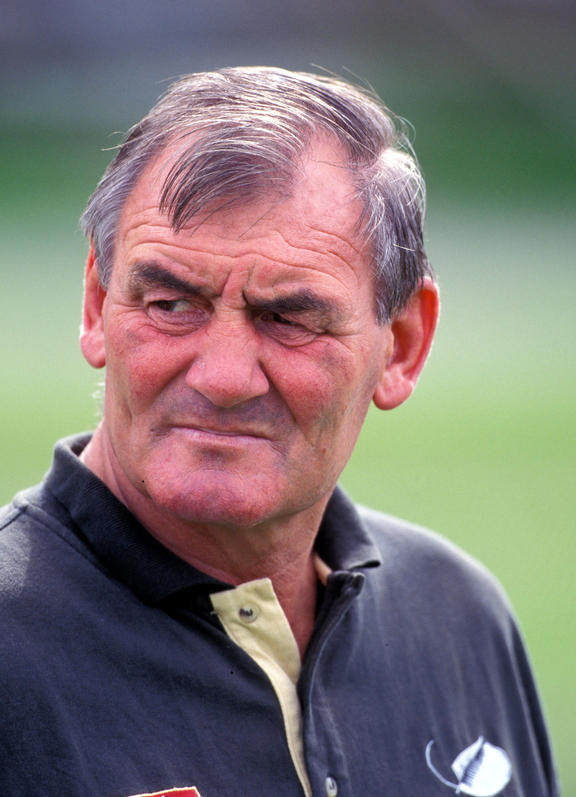 Another senior member of the side, Doug Bracewell, recalls that as an inside back he enjoyed the fact that Sir Brian [who played most of his own rugby at No.8] went out of his way to ensure the backs were treated as equals.

"He showed a lot more subtlety about back play than most coaches of his time. He was always looking for us to play an expansive style of game and that made not only the game itself, but training, enjoyable. We were forever moving the ball wide and trying new things. It was refreshing and we loved it. There were a lot of times when we didn't want training to stop."

For coach Lochore the task was not impossible but there was one major concern, all three games were set to be played in a one-week time frame.

"It was a crazy programme, especially for a union our size and with our playing resources but we had no alternative but to tackle it head on. The pressure on the players was enormous and, quite frankly, I couldn't see them getting through it. The mental exhaustion alone would surely be too much for them to handle."

Well, crazy or not, history shows that Wairarapa-Bush met their formidable challenge with a gusto which had them hitting the headlines of sports pages all around the country, and even further afield.

A Taranaki side spearheaded by All Blacks Graham Mourie and Dave Loveridge came to Memorial Park in Masterton as firm favourites for the North Island Second Division title.

Knowing that nullifying the influence of Mourie and Loveridge would be the key to any Wairarapa-Bush win, Sir Brian devised a plan which had Wairarapa-Bush focusing on running the ball at those two players so as to take them out of the game. "We figured the more time we had them on the ground the better for us and that's the way it worked out."

Gary McGlashan considers that 15-6 win over Taranaki the most exciting game in a career which saw him play more than 100 first class games for his union. "The crowd got right behind us, there was so much noise it made the hairs stand up on the back of the neck. We daren't lose with that sort of support behind us."

After the victory over Taranaki the next assisgnment for Wairarapa-Bush was a match against South Canterbury, both for the National Second Division championship and a chance to play bottom-placed First Division side Southland for promotion to that competition. Here too Wairarapa-Bush rose to the occasion for a comfortable win and so the trip to Invercargill became a reality.

Aware of the mental and physical toll his players had been under coach Lochore took a deliberately low-key approach to the Southland game with the build-up consisting of a game of basketball at Kuranui College in Greytown on the way to Wellington Airport and then just a light training run in Invercargill the day before the game.

The match itself could never be described as a classic but, importantly it illustrated Sir Brian's ability to stir his players into action even when their tanks were running low.

Having stressed to his players that the wind which would be at their backs in the first half was probably worth as many as 12 points, Sir Brian knew he had to take a different tack from previous games when they were trailing 9-6 at the halftime break and seemingly lacking the energy to get out of the hole.

In the book Lochore Sir Brian said he could not remember what he said at that halftime break but the message was crystal clear. "It was one of the most difficult things I have ever done in rugby," he said. "I had to make them look at themselves, to realise that their whole season depended on the next 40 minutes. I think I might have even used the word gutless to describe how they were playing and that hurt considering I know damn well what they were going though."

Captain McGlashan remembers the players being "shocked to buggery" by Lochore"s outburst.

"It was the first time any of us had heard BJ blow his top. We were used to him coming onto the paddock and talking to us in a very controlled, quiet sort of manner, just pointing out a few things we needed to do or brush up on. But this time he really let rip. It was a good old bollocking and it really shook us up. He used words he had never used in front of us before and the effect was pretty amazing. We couldn't get back into it quick enough."

As it happened the only points in the second half was a Wairarapa-Bush try and it was a carbon copy of many of the spectacular efforts they had scored over the season. The movement started from well inside their own half and with backs and forwards combining they set up No.8 Carl Baker for the dash to the try-line. Wairarapa-Bush were in front and nothing was going to relieve them of their advantage.

Sir Brian later reflected that coaching Wairarapa-Bush through those seven days stood him in good stead when he took charge of the All Blacks and found them in similar situations, especially during their 1987 World Cup campaign.

"It certainly taught me a lot in regards to preparing any side from a psychological viewpoint. You can't keep pushing players, physically or mentally, because in the end something will give. You have to keep them as fresh as you can so that when they go onto the paddock they are keen and alert with everything functioning at 100 per cent.

Anything less and you can't expect a maximum performance, the human body just doesn't work that way."

Maybe though it was then-Rugby News editor Bob Howitt who best described how ordinary folk up and down the country saw Wairarapa-Bush's amazing ride to NPC First Division status. "Not too many mice come to roar in the rugged New Zealand representative rugby jungle so there's a certain romance about those who do.

For top-ranked international rugby referee Bob Francis - who was later to become Mayor of Masterton - Sir Brian was the ideal man to have at the helm as a lesser person may have become swept away by the adulation accorded him and his team.

"One of the great traits of BJ is that he can relate to anyone in the community, from the man sweeping the streets to the bank manager. There is never anything false about him and people in smaller areas like Wairarapa-Bush respond to that sort of leadership. To them BJ was just BJ, nothing more, nothing less. No matter how well the team performed they knew he wouldn't change, that he would have his feet firmly placed on the ground."

* Gary Caffell was co-author of the authorised biography, Lochore - An Authorised Biography, first published in 1996.

This story first appeared in the Wairarapa Times-Age