The Warriors' Mt Smart Stadium nightmare in 2019 has hit a wretched low in the form of a 46-12 NRL king hit from Canberra. 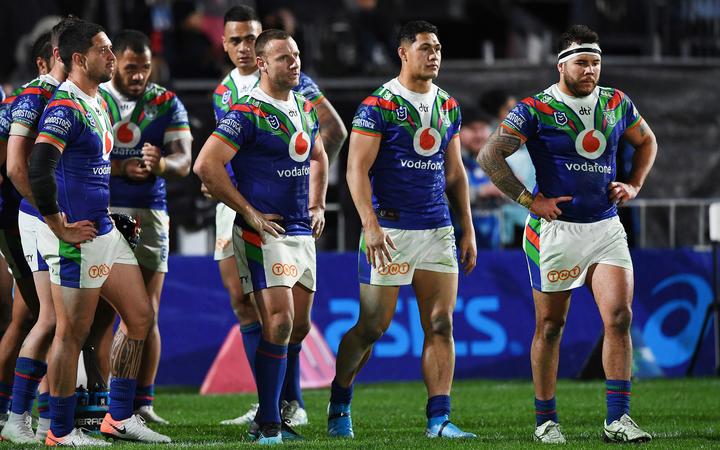 They'll remain 12th by the end of the weekend but can't fancy their hopes on current form, combined with a tough run home and ongoing injury problems for Kodi Nikorima and Karl Lawton.

Coach Stephen Kearney delivered his lacklustre players a rocket at the break and was still steaming at fulltime.

"It wasn't anything technical or tactical tonight. It was about a real lack of attitude, which is really disappointing," he said.

"Canberra are a well balanced footy team with a really good dummy half (Hodgson) who is really crafty and special around there. But I didn't think we put up much of a fight."

A sixth-straight loss at their Auckland home is at the heart of their woes, equalling their worst run there, established more than 20 years ago.

They never looked like ending it as Auckland-born starting props Sia Soliola and Josh Papali'i both powered over in the opening quarter.

Captain Hodgson, playing his 100th match for the Green Machine, was as influential as both coaches had predicted.

The Josh Hodgson-inspired Raiders unfurled a wet weather rugby league clinic against the disorganised hosts, scoring five of their eight tries in the first half on Friday to register a 13th win and maintain their push for a possible top-two finish.

The English international hooker put Soliola clear with a short ball, pulled off a trademark strip in the lead-up to centre Michael Oldfield's try and punctured the line to set up the first of a double for winger Bailey Simonsson.

Hodgson's own try from dummy-half after halftime was his first of the season, icing Canberra's seventh win from eight games, including the past four in a row.

Joseph Tapine and Jack Wighton crossed late in the each half, the former's try the best of the game as the visitors unleashed a succession of brilliant offloads.

Victory was built on coach Ricky Stuart's game plan to strangle the running game of Warriors captain Roger Tuivasa-Sheck through an effective kick-chase.

Territorial dominance was the result.

"When we saw the conditions tonight, we had a little plan in place and they were very diligent towards executing it," Stuart said.

"If you're not chasing your kick and presenting a line there, they can really cut you up.

"You only have to look at their stats to know how big their plays from the back field are."

Five-eighth Nikorima (ankle) and hooker Lawton (shoulder) didn't finish the contest, with both having potentially aggravated injuries that had kept them sidelined in recent weeks.